Death on the Page: A Castle Bookshop Mystery 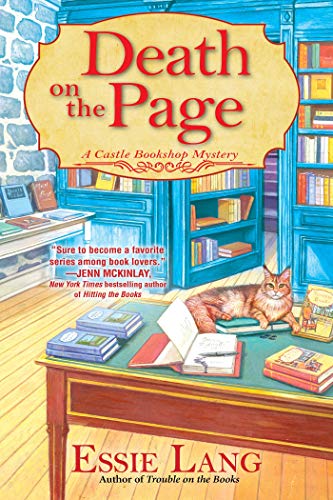 In Essie Lang’s second book in her Castle Bookshop Mystery series, Death on the Page, protagonist Shelby Cox is settling into life as the co-owner, with her aunt Edie, of Bayside Books. The bookstore is located in Blye Castle, a tourist attraction at Thousand Islands, upstate New York.

The castle draws many tourists, and Shelby and Edie take advantage of this by bringing in popular true crime author, Savannah Page, to do a book signing of her most recent book. Page will stay at the castle as a guest . . . the only guest in the big old castle. Her next book will be about a prohibition gangster, Joe Cabana, who was murdered in the castle in the 1920s—a crime never solved, and this is a perfect place for her to get the feel of the character.

The book signing is a great success with only one glitch. Local writer Jenna Dunlop appears and creates a commotion by charging Savannah with stealing her idea about a book on Joe Cabana. Savannah denies the charges and Jenna leaves abruptly. Edie and Shelby take Savannah and her fiancé, Liam Kennelly to dinner, and the topic is avoided.

On the following morning, Savannah’s body is discovered at the base of a stone staircase. She is dead, and it does not take long for Tykla Stone, Chief of Police, to declare the death a murder. Shelby, with her reputation for solving a murder case the previous spring, quickly comes into the picture as sleuth extraordinaire.

She is told by her aunt, Edie; Chief of Police Stone; and her boyfriend, Zack, to stay out of the investigation. And yet that does not happen. Shelby uncovers several candidates for the murderer including Jenna Dunlop; Liam Kennelly, the fiancé; Bryce O’Connell, Savannah’s agent and previous lover; Matthew Kessler, island caretaker; and Rachel Michaels, would-be author who also claims to have had work stolen by Savannah.

In addition to the murder, it is learned that several items have gone missing from the castle—items of more historic value than monetary value but stolen nonetheless and Shelby can’t help but wonder if the thefts and the murder are connected. Through her investigation she learns that her part-time employee, Cody, a young college student, may have been responsible for the theft of an architectural drawing of the castle with its hidden passageways.

His confession brings to light a connection with several friends who claimed they wanted to access the castle and pull a college prank, but could they have been responsible to killing Savannah?

While the premise of the story is a good one, and Lang provides a good number of possible culprits, she frequently goes off track taking the story down unnecessary paths with a large number of characters whose stories don’t relate to the crime—Taylor, Shelby’s pregnant friend is having mother-in-law troubles but adds nothing to the murder story; Chrissie Halstead, castle employee who informs Shelby of the thefts, but offers no other connection; Edward White, the man hired to act as butler for the overnight event is questioned but has no motive.

Lang has almost no conflict between characters and little tension until the very end when the murderer confronts Shelby.  Even the thefts are not resolved except for the architectural drawing when it is determined that this theft had nothing to do with the murder and was, perhaps, an unnecessary side trip away from the story.

Throughout the story there are references to Shelby’s father, but no information as to whether he is dead or alive, as well as to her mother’s disappearance when Shelby was a child. If this was discussed in the first book, there should be a brief reference as well in this one for the readers who are not familiar with the first book. In an attempt to provide background to Shelby Cox and who she is, Lang inserts Izzy Crocker, a woman who knew Shelby’s mother and the partial story of her disappearance.

While background is often helpful in creating a character, Lang’s handling of this issue was more confusing and disruptive than helpful. She would have been better served by letting Edie provide the information rather than a character who was created for the sole purpose of putting Shelby’s background into the story, then disappears never to be heard from again.

As cozy mysteries go, Death on the Page provides the reader with a satisfactory story. Perhaps the next installment will have more tension and conflict and a tighter story with fewer distractions. It will be something to look forward to.