Death of a Nation: 9/11 and the Rise of Fascism in America 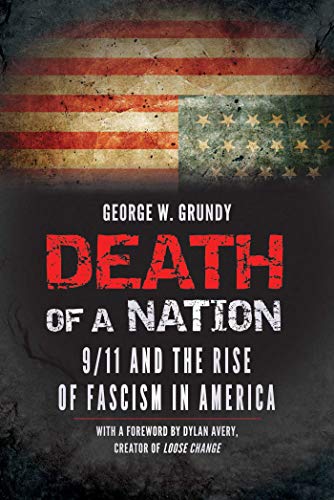 George Grundy has done us all a great service: he’s written a definitive and expansive book about the events of 9/11 and its aftermath. Spoiler alert: Grundy, like the reviewer, believes the 9/11 attacks were a false flag perpetrated by elements in our own government along with foreign help, financing, and patsies who would take the fall for the crime.

Dylan Avery contributes the foreword, and like Avery’s documentary Loose Change, Grundy leaves no stone unturned in the events leading up to 9/11, such as the terror suspects’ incompetence in flying, arrogance, stupidity, and lack of discretion in public, the FBI being pulled off the suspects tails due to interference at the top of the Bureau, and the myriad inconsistencies of the two years leading up to the attacks.

Grundy covers all the bases on the day of September 11, 2001, including the free-fall collapses of the World Trade Center buildings and Building 7, the Pentagon attack which shows no evidence of a plane hitting the building, and the fourth plane which fell near Shanksville, PA, which was almost certainly shot down by a missile, not by the courageous passengers. The author also importantly cites the removal of rubble of the twin towers which would have proved explosives were used to take down the World Trade Center buildings.

Grundy connects the dots between the chain of command in the White House, Pentagon, Saudi and Pakistani agents, and shadowy war games designed to confuse the coordinated response of America’s air force (by NORAD). There are many other dead giveaways that parts of the U.S. security apparatus were behind the attacks that the author details.

Grundy documents how certain actors in the military and intelligence high command and Bush Administration covered up these events, using the media to immediately and conveniently blame Osama bin Laden and al Qaeda, despite no hard evidence of their involvement.

The horrible events of that day were then bizarrely and grotesquely spun by the government and mainstream media to create a cause for war with Iraq, even though no evidence was found connecting al Qaeda to Saddam Hussein, and no WMDs were found in Iraq post-invasion.

Stoking fear and paranoia among the populace, the author rightly points out that our massive military budget and global war on terror could never have taken off without the “New Pearl Harbor” that various Republican elites called for pre-9/11.

With a compliant, submissive citizenry obeying and believing whatever lies the government tells us, the Bush, Obama, and now Trump regimes have continually stripped our rights, whittled away at any anti-war resistance, corporate control of government via lobbyists, and robbed us blind via Wall Street bailouts and rising inequality. Grundy sees all these issues as connected, and rightly so. There are also the tragedies of the prison-industrial complex and total surveillance society which the author deftly touches on near the end of the book.

Finishing the book by drawing on the events of 2016, the author points out that President Trump fits many of the characteristics of a fascist. Trump’s hatred toward minorities and chauvinism are total horrors, no doubt.

Grundy sees a massive economic depression and wars igniting around the globe on the horizon due to the ignorance, incompetence, and bellicosity of the American Empire. This is certainly possible, yet as Grundy points out, the American people are far more progressive than their government.

While the author sees a slide into outright fascism as nearly inevitable in the near future, this reviewer would caution against such a prediction. The outright arrogance, stupidity, and patriarchic, violent nature of the American government, which Trump embodies, may yet serve as a warning to the American people against following such a dark path.