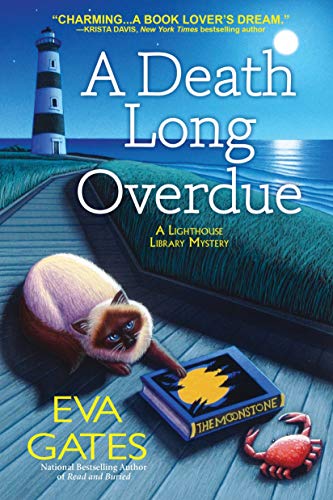 “Gates does a particularly good job of setting clues and red herrings for the reader to deal with and ties up all the loose ends.”

Lucy Richardson has been the assistant Librarian for over a year at the Lighthouse Library in Nags Head, North Carolina, and murder seems to beset her at every turn.

A college reunion for her boss, Bertie, is set for the evening, and classmates begin to arrive. One unexpected person, Helena Sanchez, appears, much to the chagrin of the other attendees. Helena was not a college graduate as are the others, but rather the Head Librarian, previous to Bertie.

Helena knows many of the attendees and is rude to all of them. It does not take Lucy long to learn that Helena is not well liked by the others, but she tries to make her feel welcome. Helena does not help the situation when she sees an artifact in the historical display of the library that further sets the tone. She is obviously upset by what she sees, but what could it be?

At the end of the evening, library volunteer, Louise Jane, a believer in the supernatural, has convinced everyone that she can converse with the historical spirits that live among them, and the group decides to take a walk along the boardwalk outside the library. It’s a dark night, and the group, led by Louise Jane, converges on the walk leading to the marsh.

The ladies break off from one another—one here, two there—until they reach the end of the walk only to find a body floating in the water. Helena Sanchez is as dead as anyone can be. It does not take long for Lucy to realize it was not suicide, but murder that caused the death.

The suspects are many, as there was little love lost between Helena and the guests at the reunion, and Lucy takes it upon herself to assist Detective Sam Watson to dig to the bottom of the mystery.

The college classmates—Mary-Sue, Sheila, Lucinda, Ruth, and even Bertie—are set for questioning. But as Lucy digs deeper, she meets Tina—Helena’s identical twin, and she learns there is no love lost between the sisters. Another suspect enters the fray.

The women are not allowed to leave town until they have been questioned, and as Lucy reviews the events of the evening, she recalls Helena’s reaction to something she saw. The historical display is suddenly minus one or two items—a letter opener, and an old receipt tucked in the back of the book, The Celestine Prophecy.

As the police search the area where the body was found, they find a letter opener in the water, and a torn-up book receipt that has been tossed into the trash. Although Helena was definitely murdered with a sharp instrument similar to the letter opener, they cannot say for sure the one they found was the implement, but they can say for sure that the receipt is the one missing from the book.

Upon close scrutiny, Lucy sees the name of a young man who was the last to take the book from the library, and she suspects there is a connection. Investigating who this young man was leads Lucy to another crime, over twenty years old. The theft of a valuable piece of jewelry. This raises the question: if Helena’s reaction was to the name on the receipt, does this mean there is a connection between a twenty-something year old theft, and Helena’s murder?

Lucy follows the money. The owner of the necklace is still a resident of Nags Head and known to Lucy—Rachel Blackstone. Could there truly be a connection, and if there is, does that make Rachel another suspect?

Lucy follows all the leads made available to her, and she begins to close in on the true culprit, but she needs evidence, and the only way to obtain it is to reconstruct the crime. She brings Louise Jane and Bertie into her plan, and the stage is set.

In spite of some minor setbacks, the plan comes off without a hitch, and the police are there to nab the murderer. Connections between the murder and the older crime become clear, and Lucy resolves an initially confusing crime.

Gates has created a good set of suspects, and a strong premise for an interesting cozy mystery. She includes a good romance between Lucy and the mayor of Nags Head, Connor MacNeil, and yet does not let that romance take the story off in another direction. Everything fits in well. It should also be noted that Gates’ police officer is portrayed as an intelligent detective who recognizes the value of Lucy’s input—a nice switch from other cozies.

The writing is strong with good description, heavy tension, and a good sense of location. Gates does a particularly good job of setting clues and red herrings for the reader to deal with and ties up all the loose ends. It’s a fast read; save a weekend for this one. It won’t be disappointing.