The Death of Kings: A John Madden Mystery 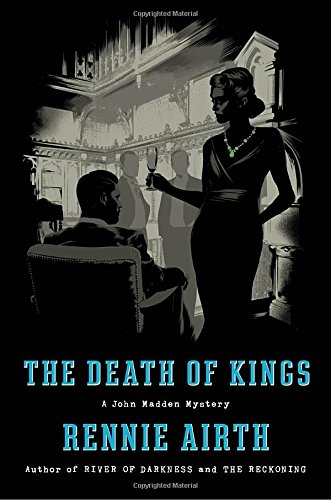 In 1938, while a guest at the home of John “Jack” Jessup, Portia Blake, a beautiful actress of limited talent, falls victim to a horrific murder. The police are swift in their hunt and quickly find the culprit. He confesses and is tried and executed for his crime.

Thus starts The Death of Kings, Rennie Airth’s recent John Madden Mystery. But is that the end? Perhaps not. Eleven years later the crime resurfaces with clues and anonymous letters claiming the wrong man paid for the crime with his life.

Enter John Madden, retired officer, who is persuaded to look at the new information. The request for help is made by his old friend, retired Chief Inspector Angus Sinclair, who led the original hunt, and is now haunted by the possibility that he was responsible for putting the wrong man to death.

Madden’s request to reopen the case is summarily rejected by Charlie Chubb, current Detective Chief Superintendent and Eustace Craddock, Assistant Commissioner of Crime. Both men are of the mind that reopening an eleven-year-old crime only to discover that the wrong man may have been executed that “all hell will break loose.”

Before they will even consider such action, the information needs to be more substantial, less circumstantial. The current clues? A jade necklace belonging to Portia Blake was sent to Tom Derry, then CID chief, who also participated in the initial investigation.

Although Charlie Chubb rejected the initial request to reopen the case, he did agree that there might be unanswered questions that should be researched. That’s all John Madden needs, and he sets off following the trail of breadcrumbs he hopes will prove that either the right man was convicted or the injustice will be resolved.

His first trip is to find all of the guests who attended the original weekend party at the time of Portia’s death, and that leads him to Sir Richard Jessup, son of “Jack” Jessup, the original host.

Richard proves to be very cooperative, recognizing that if the wrong man paid with his life, that’s enough in his mind to reinvestigate. He provides Madden with the list of guests as well as employees.

The guest included Jack Jessup, the party’s host; Rex Garner and his wife—Rex a womanizer who only married his wife for her money; Richard Jessup, up to see his father on company business; Adele Castleton, Jack’s companion; Stanley Wing, a man of dubious reputation who was half Chinese; and Portia Blake.

As well as following up with these guests, Madden meets the woman who was Portia’s roommate at the time, Audrey Cooper. Cooper’s level of cooperation during her interview is limited, and after Madden departs, she recalls something that may prove valuable—more to her than to Madden. Sharing is not her cup of tea.

As the interviews get underway, Madden learns of numerous situations that should have drawn the attention of the police during their initial investigation, but were put aside because they felt they had found their murder, and no further investigation was warranted.

Among the new information to surface was that of Portia’s unwanted attention given to Rex Garner on the evening before her murder. Was she hinting at an affair between herself and Rex? Rex was uncomfortable with the attention, but so was his wife. Clearly this was a sign of motivation to get rid of Portia.

And Stanley Wing, the man who brought Portia to the party, could have had motive. He was overheard arguing with Portia the following morning just before her death. A man of unsavory character, murder would not be beyond him if he were attempting to blackmail Rex and suddenly Portia stepped in the way.

During Madden’s investigation, the media is informed of what it considers a cover up of the original investigation and pictures mysteriously appear in the local paper—pictures of a naked Portia Blake in a room with a man, whose face is hidden from view. Upon further questioning, Rex Garner refuses to answer any questions without legal counsel.

But where is Stanley Wing? In prison in Hong Kong . . . but not. He has been released and has disappeared. Rumor has it that Wing has left Hong Kong and has resurfaced in London, and everything points to him having these pictures.

Just as the investigation seems stalled, a new wrinkle appears: a Chinese gang, the Tang Triad begins to make its presence known in London, and clearly they are after Stanley Wing. In desperate need of money and a new identity, Wing is assumed to be blackmailing Rex Garner.

Madden is convinced that Wing is responsible for sending the anonymous letters and pictures to the media, but he cannot make the connection with Portia’s murder.

As the investigation deepens, Madden is drawn back to Audrey Cooper’s flat, only to find that she has been murdered and a suspect was seen racing from her home just minutes before Madden’s arrival. While questioning Audrey’s roommate, Madden discovers that the pictures sent to the media were from Audrey.

Rex is not out of hot water yet, and Madden realizes he still has unfinished business with the man. The question surfaces in Madden’s mind: If Rex was the man in the photographs, was he being blackmailed by Audrey? Upon arriving at Rex’s home for another confrontation, Madden makes a discovery that will again change the course of the investigation.

Questions remain unanswered as the press clambers for more details. The clues begin to come together and Madden discovers the truth behind Portia’s death.

Airth does a good job of laying out the story and providing the clues necessary for solving the puzzle. The solution is not totally satisfying, but considering the facts, it is perhaps the only possible solution.

This is a well-constructed story—a real page-turner. For anyone looking for a good read, this one belongs on the library shelf.