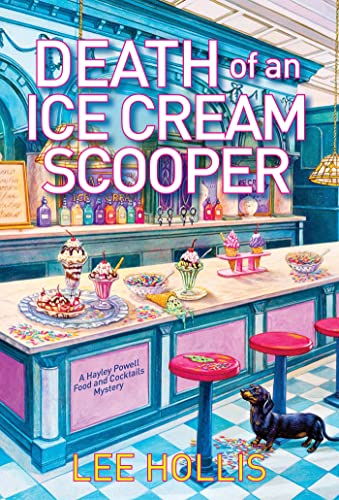 “Lee Hollis does a good job of dispersing red herrings and keeping true identity under wraps until the requisite climactic scene at the end of the story.”

Hayley Powell has developed a reputation for unraveling mysteries in the small town of Bar Harbor Maine, so it’s no surprise when Hayley’s friend, Lynette Partridge, owner of Bar Harbor Ice Cream, asks Hayley to find out if her [Lynette’s] husband Jamie is having an affair.

As much as Hayley prefers not to be involved, she agrees to help Lynette, and observes Jamie in a very intimate conversation with a young woman.

But shortly after seeing what she thinks is a tryst, things get really dicey when later Lynette delivers ice cream to Hayley’s restaurant, and they discover a dead body in the ice cream truck. “Lynette spun around to see what had shocked her [Hayley] so badly. When her eyes fell upon the dead body sprawled out on the floor of her truck, Lynette let out a blook-curdling scream. . . .”

Hollis adds more to the story when, upon close scrutinization, Hayley realizes that the murder victim, Miranda Fox, is the young woman she observed with Jamie.

As cozies go, this is a good premise but add to that shock the fact that the murdered young woman was one of Lynette’s employees, and life really becomes complicated. That’s pretty much how Lee Hollis’s new cozy, Death of an Ice Cream Scooper starts off.

Hollis follows the typical structure of a cozy by placing Hayley as the chief investigator. Several characters come up as suspects including the sons of two of Hayley’s friends: Chet, son of Carla; Mona’s son, Spanky; another of Lynette’s employees, Bethany; and Chasen, the boyfriend of Zoe Nash, daughter of the town’s immensely wealthy Nash family. Lee Hollis does a good job of dispersing red herrings and keeping true identity under wraps until the requisite climactic scene at the end of the story.

In addition to the throughline of the story, Hollis adds in a few sidebars, including the arrival of Hayley’s son, Dustin, and his very pregnant girlfriend, MacKenzie. Dustin’s role folds well into the story when his best friend Spanky is thought to be the murderer, and the tension between Hayley and Dustin ramps up.

The story for the most part is told in third person. This presents one major drawback to the entire story, and that is the insertion of five first-person chapters that have absolutely nothing to do with the story. Presumably these added chapters are columns that Hayley writes for the local newspaper, “Island Food & Spirits by Hayley Powell,” with each column ending in local recipes. These chapters are distracting and although they talk about the various characters and how they relate to Hayley, they have no relation to the story and take the reader away on unnecessary side trips.

In spite of this distraction, Lee Hollis’s followers will find the story enjoyable and will, most likely, relish (pun intended) the many recipes provided.