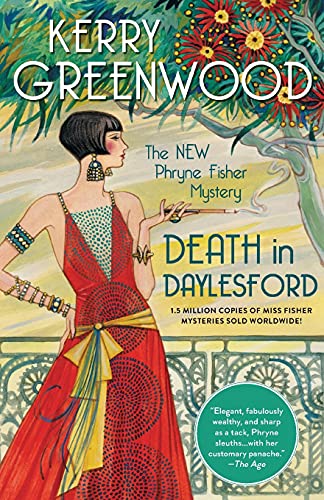 “Greenwood’s fans will be satisfied as Miss Fisher uses her cunning and wit to solve another crime and keep her reputation intact.”

With Death in Daylesford, prolific Australian author Kerry Greenwood presents the 21st in her Phryne Fisher series of cozy mysteries.

Her returning characters in the series remain familiar to her readers and require little, if any, further description. Greenwood does share some visuals regarding the attire of Miss Fisher and her companion, Dot Williams.

In this story, Greenwood tends to over-describe some of her new characters, leaving the reader unclear as to what they look like the next time they are encountered.

It seems that wherever Phryne goes, murder will out! In this story, Phryne is invited to a spa in Victoria’s spa country. Preparing for a relaxing week, it comes as no shock when she encounters not one murder, but a series; and in addition to murder there are disappearances of local wives. Phryne rolls up her very attractive and equally expensive sleeves and begins to search for the answers.

The mystery, as Greenwood has laid it  out, is interesting with its various twists and turns. There is the romantic interlude with Captain Spencer, the owner of the spa; the encounter with no less than three murders of young gentlemen whose only connection is their romance and flirtation with one of the local beauties; and of course, the curious disappearance of several wives with absolutely no clues to follow.

Phryne indulges her curiosity and detecting skills in the murders and disappearances, and of course the good captain is initially questioned about any participation he might have in either activity.

Greenwood lays out several clues and some foreshadowing for the reader to follow, and if this were the only path for this particular book, it would be a good read.

That being said, Greenwood has included a second story with no relationship to the first. In the second story, Greenwood takes the reader back to Phryne’s home in Melbourne where her adopted children involve themselves with their own murder mystery.

It is with this second story that the book becomes somewhat cluttered. Greenwood segues from one situation to the other mid-chapters, thus leaving each story more or less on hold. The book would be much clearer were the second story perhaps written as her 22nd book.

Greenwood puts most of the attention to the events in the spa story, where Phryne associates herself with an inspector brought in to chase his own clues, and between the efforts of both investigators, they follow the path toward the solution. It should be noted that Greenwood does a good job of laying out those clues, especially for Phryne to glean information from.

The characters range from an inept local constable who does his best to thwart Phryne’s efforts, to an unkind uncle who owns the local tavern but forces his nieces, Annie and Jessie, to run it while he sits back and rakes in the profits. Annie, the local beauty, is the subject of Phryne’s curiosity regarding the murders; her sister Jessie fears that Annie might become an unwitting victim.

Dulcie and Alice, a lesbian couple, own the hotel where Phryne and Dot are staying, and they provide information about the townspeople to help Phryne in her investigation and set her on the right trail. Various other minor characters are thrown into the mix as either victims or suspects.

Greenwood’s fans may find it disappointing that regular character and sometime romantic partner for Phryne, Detective Inspector Jack Robinson, does not play a role in this story except for a small bit part at the very beginning and the very end of the story. Presumably these brief appearances are only to explain why he is not carrying his investigative weight in the story.

She also inserts parenthetical expressions in some narrative, presumably for clarification, but they only add unnecessary words to the story: “‘This is Alice,’ as another young woman appeared (easily identifiable as such in a long, grey skirt and light woolen jumper);” or “They kicked off their shoes, which landed on the carpet directly outside for tinker to take them away and apply boot polish thereto (This part of Tinker’s going-to-sleep ritual gave him a deep and utterly improbably satisfaction.)” The parenthetical expressions appear with increased frequency with no obvious benefit to the reader.

Greenwood’s dialogue is peppered with Aussie dialect, giving the characters more depth and authenticity. The story as it involves Phryne and Dot is well plotted, but the book would be a more interesting read without the unnecessary side story.

Greenwood’s fans will be satisfied as Miss Fisher uses her cunning and wit to solve another crime and keep her reputation intact.