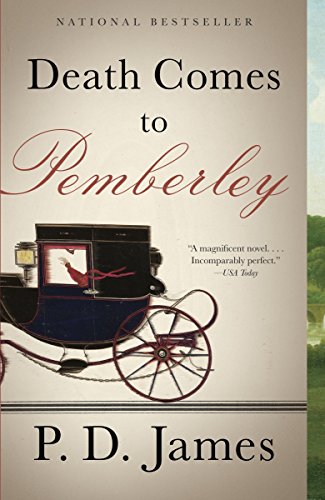 “Ms. James is nothing short of brilliant. Successfully channeling the spirit of Jane Austen, P. D. James perfectly captures the distinctive essence of the beloved characters of Pride and Prejudice.”

Resuming six years after the marriages of the three Bennet sisters—Elizabeth to Mr. Darcy, Jane to Mr. Bingley and Lydia to the scandalous Mr. Wickham—mystery writing dynamo P. D. James pens the continuation of Pride and Prejudice.

After deftly bringing the reader up to speed on where things had left off, Ms. James reestablishes a comforting reacquaintance with the dashing Darcys of Pemberley. Now raising two small boys, Elizabeth is happy and content in her life, as is her older sister Jane.

Though the dust of the scandal surrounding their younger sister Lydia’s marriage to George Wickham has settled, the sentiment of the ordeal has not. As a result, neither Lydia nor her husband is welcome at the Darcy estate. With the annual Lady Anne’s ball just on the horizon, Elizabeth and the Pemberley staff are busy making preparations. In addition, further excitement is expected to unfold, as Mr. Darcy’s sister Georgiana has two suitors vying for her hand—their stately cousin Colonel Fitzwilliam, and the much younger new comer Mr. Alveston.

However, the air of calm is fleeting for on the eve of the ball, Lydia Wickham will once again shatter peaceful domesticity, commencing with a desperate carriage ride to the Darcy’s front door where her hysterical claims of murder will once again plunge George Wickham back into the center of controversy.

Previous to the efforts of P. D. James there have been many who have attempted to addend the works of Jane Austen, especially with the bicentennial of Austen’s first book, Sense and Sensibility, upon us. But in this instance, Ms. James is nothing short of brilliant. Successfully channeling the spirit of Jane Austen, P. D. James perfectly captures the distinctive essence of the beloved characters of Pride and Prejudice.

Further, Ms. James stays true to the original and does not make the mistake of trying to mold the characters to her craft; instead, she seamlessly molds her craft to them. However, the result of having done so doesn’t make for the edge-of-your-seat intensity of traditional mysteries or the style of writing that P. D. James fans may be accustomed to, but rather a sophisticated rendering of an estranged family member’s unfortunate circumstance.

P. D. James has embarked on a truly brilliant effort that combines two of her passions in near perfect execution. Death Comes to Pemberley is a tribute, a commemorative endeavor that stays true to the tone and voice of the original, honoring a classic in its most basic form.