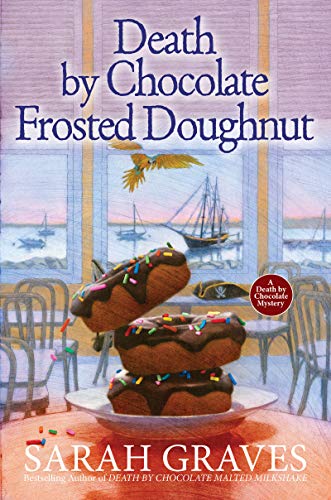 “The premise that Graves lays out for her readers is a good one. The writing? Not to be unkind, but Graves could have used a good editor.”

There is a reason that cozy mysteries are enjoyed by so many—no gratuitous sex, any violent crime is committed off-site, the protagonist can do whatever she wants, her family helps her out at every turn, the bad guy is . . . well . . . perhaps nasty but not violent, and the police are useless. And the list goes on.

And that would be why Sarah Graves’ new cozy mystery, Death by Chocolate Frosted Doughnut will, presumably, be enjoyed.

The protagonist, Jacobia “Jake” Tiptree and her best friend Ellie Valentine own The Chocolate Moose, a waterfront bakery in Eastport, Maine (the easternmost town in the United States that boasts a population of about 1,200) where they are baking up a storm to satisfy the sweet teeth of the visitors enjoying the annual Pirate Festival.

The festival is underway, and everything is moving along a smooth track when Henry Hadlyme, a regional celebrity chef appears with his recording crew, ready to make trouble for Eastport and its residents—especially those who have anything to do with food—like Jake and Ellie.

Jake is a woman not to be toyed with. Well into at least her 40s, with a son, daughter-in-law, grandson, and a father and stepmother all living with her, she has seen enough of life not to be put off by some pushy bully. She speaks her mind. She loves her town and its residents and will brook no nonsense from outsiders, and she lets Henry know that in no uncertain terms when they get into verbal fisticuffs and threats bounce back and forth.

It is several hours later when Jake is trotting down into the shop’s cellar, when she stumbles (literally) onto Henry’s very dead body. Stabbed with an antique cutlass, Henry’s body is a nasty sight. As she is hovering over his body, who should enter, but Bob Arnold, the local police chief.

Of course, Jake is the prime suspect. Means: She had access to the murder weapon from her husband’s collection; motive: She was heard to argue with Henry and threaten him; and opportunity . . . well, he was found in her basement.

From this point on, Jake and Ellie take it upon themselves to solve the murder and prove that she had nothing to do with it. Small clues begin to surface: a mysterious boat arrives in the Eastport bay but no one knows who it belongs to or why it’s there; a massive explosion, followed by more destruction occurs in the heart of town; the group of camera-ready assistants prove to have their own reasons for wanting Henry dead; a 20-year-old suicide surfaces and relatives of the victim come out of the woodwork each with their own reason for wanting Henry dead. Jake and Ellie have their hands full following up each suspect and slowly putting the pieces together.

Although she has several good scenes where she places Jake and Ellie in danger, the story mostly lacks the tension that it deserves and there is almost no conflict—certainly none with the family, and little with the other possible suspects. No one seems to care that Jake is about to be arrested for murder. The police chief, Bob Arnold, might as well be missing throughout the story. He does virtually no investigation on his own. When the first bomb explodes in the town, right in front of The Chocolate Moose, the level of concern is no worse than someone having a bad cold.

The narrative also tends to move the story around in confused directions. In one scene when Jake is in the middle of what should be a life-threatening crisis—when Jake and Ellie should be worried to death about a murder charge—they are in the bakery plugging away at making cookies, and the reader has to wander through flour, eggs, chocolate chips, sugar, milk, and whatever other ingredients go into the tasty morsels being baked, while Jake and Ellie are unconcerned about the onslaught dilemma they face.  At no time does the reader believe there is any real danger of Jake being charged with murder.

Graves misses several opportunities because of her writing style. The dialogue is choppy and seldom flows between the characters in a scene. It starts, then the character speaking stops mid-thought, and here Graves plugs in some cute little comments. She has written the story in the first person, and therefore shares every minor thought in Jake’s mind, and as a result the story tends to wander in different directions.

While the overarching story is a good premise, Graves has inserted some situations that raise questions. The murder weapon is stolen from Jake’s husband’s display of antique weapons during the pirate extravaganza, and no one notices? The mystery sailboat arrives during the festival and suddenly there is question about what connection it might have to the murder . . . now why would that be? Graves has laid no groundwork to make that connection. An antique cannon is stolen from Jake’s front porch and presumed to be used to destroy the small town . . . how exactly does an antique cannon get stolen from a family’s porch?

Graves’ word choices at times are baffling. She overuses adverbs and at times even makes them up, like puzzeledly. She would do better getting out Roget and looking for some stronger verbs and casting the adverbs into the Eastport bay.

Despite the criticism, however, it should be noted that Graves pulls the story together at the end with an exciting scene that identifies the real culprit and brings that individual to justice, even tossing in a twist to raise a reader’s eyebrow.