A Death in Chelsea: A Mayfair 100 Mystery 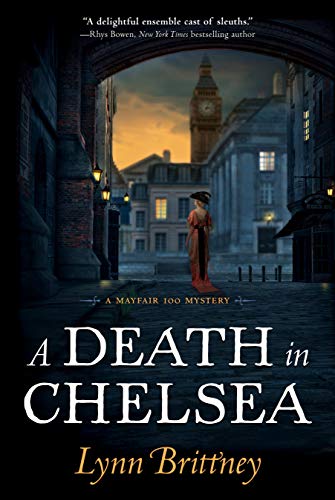 “Be warned: Once you pick up the book, you won’t put it down until the end.”

It is 1915, and Chief Inspector Peter Beech is worried. His newly formed, elite team of Scotland Yard investigators is becoming restless. An unusual collection of professionals—three women and two men—made a name for themselves when they solved a previously ticklish case, and now they are itching for another, and yet there is nothing in the wind.

That is, until Beech is called to his boss’s office to investigate what appears to be a simple suicide, except that the mother of the victim is convinced that her daughter would never commit such a sin.

This is how Lynn Brittney’s new novel A Death in Chelsea opens.

The Duchess Penhere is a friend of Sir Edward Henry, Beech’s boss, and he needs special handling for a dicey case. The victim, Duchess Penhere’s daughter, Lady Adeline Trehorne, is more than just a lady of social standing . . . she is a “social commentator . . . in the London Herald.” That is to say, she is a gossip columnist who focuses on gossip relating to those of high social standing. To say she is disliked would be an understatement of gargantuan proportions.

Beech’s task is to take on this death, treat it with kid gloves, and determine the veracity of Adeline’s death—suicide or accident or murder.

The team is ready to jump into the fray without a second thought. The members: Dr. Caroline Allardyce, doctor; Mabel Summersby, pharmacist; Victoria Ellingham, lawyer; Arthur Tollman and Billy Rigsby, both trained policemen—all bring exacting skills to their assignments on the team.

Add to these members Victoria’s mother, Lady Maud; Billy’s mother and aunt, Elsie and Sissy respectively, and Timmy, a well trained but ill-behaved dog, and there is little that Beech can’t uncover about his assignment.

It does not take long for the team to determine that Adeline’s death was, indeed, not suicide, but murder, and with that determination comes the reality that there are a number of candidates that prove to be strong suspects in the murder.

To say that Brittney is creative in laying out her plot would not do her justice. Each member of the team is assigned a task, and Brittney takes the reader through that individual’s assignment while the others go about their business until it is their turn. Thus each member gathers his or her appropriate clues and lays them out to be organized for the reader to follow.

As the search for clues moves forward, it soon comes to light that Adeline was more than a gossip columnist—and there is question about that as well—she was a blackmailer. Since her father, now deceased, had lost his fortune as well as social standing, Adeline had to become creative in how she lived according to her past standards. And as she learned society’s secrets, she also cashed in on them.

The list of suspects begins to diminish as the blackmail list unfolds. Among the suspects: a phony major, the wife of a member of parliament, a suffragette, a jeweler, and a baby killer. A wide variety of suspects, indeed, but each member of the team does his or her due diligence until the true culprit is uncovered.

Brittney should be given her due for laying out all the appropriate clues and slowly joining them together until the raucous fight at the end of the story that includes a double shooting, a kidnapping, and a final comeuppance for the truly guilty party.

Be warned: Once you pick up the book, you won’t put it down until the end. Lynn Brittney has a problem on her hands: How does she write a better story now?