Death of an Avid Reader: A Kate Shackleton Mystery 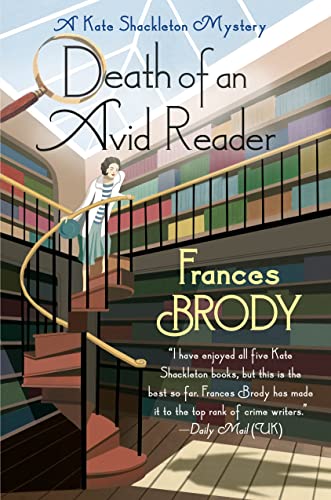 “an excellent choice for those who prefer a more complex cozy mystery than the usual offering. Highly recommended.”

A beautifully written, cleverly plotted period piece set after the First World War that remains one of the mysteries of Dorothy L. Sayers and Agatha Christie, Death of an Avid Reader by Frances Brody is a treat for devotees of well-crafted cozies.

Kate Shackleton, widowed by the Great War and a volunteer nurse during that bloody conflict, has seen more death than the average woman of her social class, and has no desire to see more. Accepting Lady Coulton’s assignment to find the socialite’s lost daughter is a matter of a missing person, with little likelihood of violence.

All Kate has to do is find the missing daughter without revealing the scandal associated with her. “My husband is unaware of her existence,” Lady Coulton tells Kate. “I dared not risk a scandal, you see. My husband would have felt obliged to divorce me.”

Kate does see. A divorce would have cost Lady Coulton her social status and custody of her three sons by Lord Coulton.

Kate also understands why Lady Coulton would hire a woman detective from Leeds rather than one in London. Her husband, although critically ill, might learn of his wife’s indiscretion if a London detective stirs up muddy waters too close to home. Best to hire an out-of-town lady detective like Kate.

The daughter, named Sophia Mary Ann Wells by her adopted parents, a fishmonger and his wife Jennifer, is now 24 years old. Lady Coulton even now does not intend to recognize the girl, but only wants to know if she is doing well.

Kate accepts the job, thinking that finding the girl should not be too difficult. She knows the girl’s name, where she lives, and the names of her adoptive parents. She does not know the name of the father, a young man who came to the Coulton’s country home to catalog old diaries.

“Who was the passionate young man who danced into her life so briefly? How must she have felt, giving birth to a child and then handing the baby to a stranger, to be brought up under another name?”

These are questions that Kate is unlikely to learn the answers. Her task is clear: find Sophia Mary Ann Wells.

Kate and her partner, Jim Sykes, can find no trace of Sophia, either in the town where she supposedly lived with her adoptive parents, nor at the school she attended. Stymied, Kate places ads in six regional newspapers asking Sophia to contact her.

Kates stops by the Leeds Library, a private institution in which one buys shares, to beg off an evening meeting. She doesn’t want to be involved in a contentious discussion about finding a new location for the library.

A chance meeting with Dr. Potter, a delightful share holder who is in favor of moving the library, alerts Kate to several developments: Miss Montague, a counter assistant, is missing; Mr. Lennox, the director is being indiscreet; and, after 40 years of silence, the ghost of Leeds Library is stirring again.

Also, Dr. Potter is in high dudgeon or as much as such an amiable man can be, over Mr. Lennox’s publicizing the number of very rare, very valuable books housed at the library. “What will Lennox do next? Send a personal invitation to every book thief in the country?”

Kates does not want to make any inquiries about the whereabouts of Miss Montague, whom Mr. Lennox claims was dismissed for stealing valuable books, nor does she want to investigate any ghost stories.

However, the matter of the ghost is forced upon her when Mr. Lennox tells her he has hired Father Bolingbroke, a Catholic priest currently doing research at the library, to conduct an exorcism.

Mrs. Carmichael, deputy librarian, informs Kate that she is necessary to the exorcism. “He needs two acolytes who know the library and who are completely trustworthy. You are one. Mr. Lennox is the other.”

Unable to escape the assignment, Kate finds herself stumbling through the dark library basement as Father Bolingbroke conducts a ritual, which she supposes is a sort of exorcism.

The three do not see a ghost, but they do find Dr. Potter dead under a fallen bookcase. Close to him is one of library’s valuable rare books. Kate finds her wartime experience as a nurse useful. She reports the death to the police as occurring “under suspicious circumstances.”

The investigating officer is one with whom Kate has met before during another of her cases. It was not good experience and she has no confidence in Inspector Wallis as a competent policeman.

Before he arrives, another person is discovered in the basement not far from Dr. Potter’s body: a poor organ grinder who is critically ill with pneumonia. Of course, Inspector Wallis immediately decides that the organ grinder is guilty of Dr. Potter’s death despite Kate’s insistence that the man was too ill.

Kate’s investigation into Dr. Potter’s murder and her search for Lady Coulton’s missing daughter become intertwined as she learns more about the intrigue at the library and the possible identity of Miss Montague.

Illegitimate children, clandestine love affairs, false identities, and dark secrets lead to murder in the best tradition of the Golden Age of mysteries. Brody excels in creating a period cozy without bludgeoning the reader with intrusive explanations of how past social customs differ from those of the 21st century. Such differences are inferred within the context of the novel.

Death of an Avid Reader is an excellent choice for those who prefer a more complex cozy mystery than the usual offering. Highly recommended.