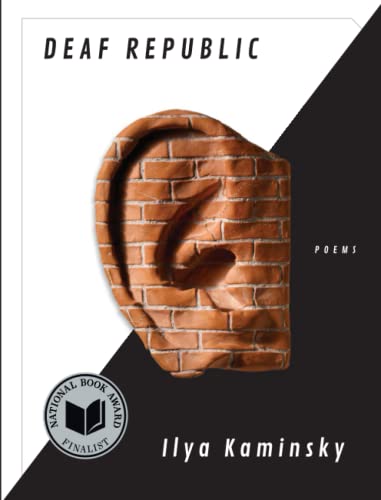 Who is the poet asking forgiveness from? Why is such a crucial request posed as a parenthetical? What is the war over? Where is it taking place? (Where isn’t it?) Simply put, why do we have it good when so many do not?

As the different, uncertain dramas of the book unfold, there’s a central drama that plays out in a foreign land, told through the lives of a man and a woman in love. Yet despite this narrative arc we find ourselves lost amid wars both literal and imagined: “Our country is the stage.” And then later, we learn that “each of us is / a witness stand.” The drama of the courtroom is found in the self, self-contained. And the evidence for all this? Those lucky enough to be alive, left only with ourselves, wondering at the carnage that remains: “something runs down the street, falls, fails to get up.” And then later: “The body of a boy lies on the pavement exactly like the body of a boy.”

While some poets might reach for a powerful metaphor, in these key moments of the book Kaminsky finds power through disenchantment instead: the body of a boy is the body of a boy. We can’t turn it into something else. And we can’t turn away. Yet the poet reminds us in a later poem, given all this violence we can still have a tendency to “pocket our phones and go.”

Silence is even extended into the visual sphere, when we “light a lamp so as not / to see.” What is, is defined by what it isn’t. Light can silence the darkness of our world.

And yet, given all this silence throughout the book, there appears to be virtue not in being silent but in listening: “You are alive, I whisper to myself, therefore something in you listens.” Here the “silence // which is a soul’s noise” is not a passive part of the body but something that actively listens, even if it doesn’t respond. At one point, the poet suggests that “[o]ur silence stands up for us,” and perhaps this is how: through art objects (whether poems or souls) that value listening over speaking. One is reminded of Heather McHugh’s poem “What He Thought”: “poetry is what he thought, but did not say.”

Silence, like deafness, are willful acts, of defiance as well as creation: “Someone has / given her a sign, which she holds above her head: THE PEOPLE ARE DEAF.” These are some of the more powerful meta-moments of the book.

But what about the drawn hand-gestures found in the pages of the book? Their purpose seems questionable, especially since the drawings are accompanied by English subtitles. Unlike the rest of the book, which is filled with sharp inquiries into the various depths of silence and speech, these drawings feel like an afterthought, tacked on. And besides, sign language isn’t merely an ornament to English words; it’s its own visual, highly interpersonal language and has no conventional written form.

The book could have done without these drawings of hand signs and without some of the other more heavy-handed moments, like when the poet voice asks the reader to “observe this moment,” as if we weren’t listening intently already.

But then again, one could argue that even the obvious must be said in multiple ways, multiple times, before we come to appreciate it. It’s become commonplace to say we are, nowadays, overloaded with information, that life is filled with white noise or static—or as the poet phrases it, “[i]n the ears of the town, snow falls.” These transcendent, figurative moments found throughout the book often connect the body politic to the human body (towns have ears), as well as to the natural world (snow as ear-muffs).

We find such distinctions between the physical and metaphysical blur even further: for example, dogs first described as medics running into the streets later become philosophers, and then ultimately silence itself: “Silence like a / dog sniffs the windowpanes between us.”

In fact, that clear barrier between us, the window that lets us see without touching the other, that unspeakable intimacy that’s been lost between us, whether through windows or language is, perhaps, the very core of this brilliant book that shimmers with silence: “How bright is the sky (forgive me) how bright.” After all, who is there to listen to our confessions if not one another?