Deadly Ever After: A Lighthouse Library Mystery 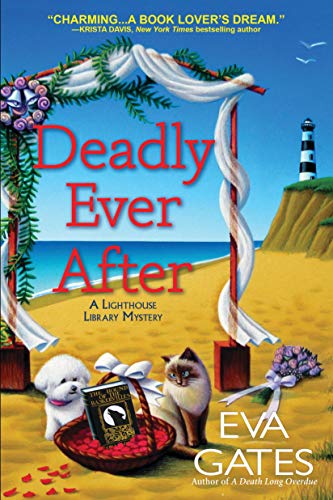 “As cozies go, this one is on top of the list. A quick read, a strong protagonist, good characters, and strong writing.”

Over the past few years, the “cozy” mystery has become quite popular. It is generally a quick read, it’s easy to understand, and it can be fun.

The plot is, however, formulaic, and the reader knows exactly what to expect. The protagonist is female, usually young to middle aged, had a failed relationship in the past that she is trying to escape, owns or runs a small boutique—a bakery, a bookstore, a craft store, a bed-and-breakfast, or a library—and the story is set in a small village or town.

The murder takes place in her place of business . . . or at least the victim’s body is found there, and either the protagonist or someone close to her (a relative or close friend) is identified by the inept police department as the perpetrator, and she is the only one who can save the day.

Now, that’s the way many of them play out. It is, however, nice to find one that while filling many of the formulaic criteria, is a well written story. And that is what Eva Gates’ newest book, Deadly Ever After provides.

Her main character, Lucy Richardson, is the librarian at the Bodie Island Lighthouse Library at Cape Hatteras North Carolina, and that meets one criterion. She is young—mid-twenties. And that is pretty much where the formula ceases to exist.

Gates starts the story at an engagement party where Lucy and her love Connor MacNeil are being celebrated. All goes well until two unexpected and uninvited guests show up—Evangeline Lewiston and her son, Richard (Ricky)—Lucy’s previous romantic partner.

Evangeline’s plan is to stop Lucy’s engagement and get her back together with Ricky. But Lucy is a strong young woman, and she’s having none of that, in spite of Evangeline’s constant nagging. As Evangeline continues her goal of rekindling any romance between Lucy and Ricky, Gates also makes sure that Lucy does not lose her focus as to who her real love is.

As the group goes to dinner where Evangeline has invited herself and Ricky to attend, the evening gets interesting. A pesky resident, Gordon Frankland, who likes nothing more than suing everyone for anything, shows up and makes a scene; it doesn’t take long for the story to take off full steam.

That means murder! A body is found behind the restaurant where the group has gathered, and it turns out to be Evangeline’s husband, Richard Lewiston, and also Lucy’s father’s law partner. No one knows why he was there, as he was also uninvited.

Gates does a good job of keeping Lucy in the investigation, while not denigrating the police officers in charge. In fact, although Lucy has helped them in the past, she makes a point of sharing all information she gets through discussions with family and acquaintances, ensuring that the police are not viewed as incompetent.

Gates provides several valid suspects for Lucy (and the reader) to consider as the murderer—Evangeline, Ricky, James—a visiting researcher, Leon—an old love of Evangeline’s—even the mob, but she throws in enough red herrings and strong alibis to keep the reader just a bit off the mark in finding the true culprit.

As Lucy continues to search for answers, she uncovers facts about extramarital affairs and illegitimate children, mob connections to Richard, financial shenanigans at the Richardson Lewiston law firm, and business mishandling at the firm as well. Lots of things to muddle the investigation.

As with all mysteries, there is the terrifying scene that brings the murderer and Lucy face to face and keeps the reader turning the pages as fast as possible! Gates also does a marvelous job of keeping the true culprit out of the reader’s mind.

There is also a side story about what will happen at the library once Lucy is married, and Gates keeps it under wraps until the end of the story.

As cozies go, this one is on top of the list. A quick read, a strong protagonist, good characters, and strong writing.