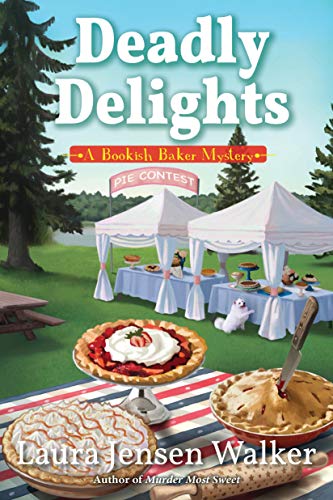 “Deadly Delights moves along at warp speed, and just when the reader thinks s/he knows who the killer is, Walker throws a speed bump on the highway.”

In Laura Jensen Walker’s second A Bookish Baker Mystery, Deadly Delights, prolific author and baker, Teddie St. John, finds herself once again involved in murder when the head judge of the Lake Potawatomi baking contest ends up face down in a custard pie, with Teddie’s rolling pin as the murder weapon.

Lester (the molester) Morris, President of the Lake Potawatomi Chamber of Commerce, has fondled one two many women and angered the female citizenry, or the husbands, or boyfriends, or parents, or whomever. So when he is found dead just before the contest begins, no one is too terribly surprised.

And the suspects come out of the woodwork with Teddie leading the pack when Les’s wife, Patsy, throws charges at Teddie and her friend Sophie as the prime suspects.

Teddie, at 43, and in love with another prolific author, Tavish, must clear her name before her future crumbles, like an overcooked coffee cake. To do this, she must find others who had motive to do away with Les. The skies open and more suspects begin to fall: Colleen, the owner of the yarn shop; Angel, Les’ pole-dancing paramour; Sophie, Teddie’s young friend and neighbor; even Stephen Morris, Les’ son, just to name a few, begin to muddy the waters.

As with most cozies, the protagonist has at least one partner in crime, helping her to solve the mystery and extract herself or her closest comrades from jail time. In Deadly Delights Teddie has two besties who provide the support she needs: Char and Sharon. Char is Teddie’s strongest aide-de-camp and is engaged to the town sheriff, Brady. It’s good to see that Walker has created a strong sheriff in Brady’s character—not one who is treated as the incompetent law enforcer.

Patsy keeps the heat on Teddie and on Brady, while Wilma Sorenson, the town’s gossip queen, fuels the fire with her unfounded tales, making life just a bit more difficult for Teddie to sort through.

Add to the murder of Les Morris the difficult relationship Teddie has with her mother, and we have a delicious set of conflicts. Teddie and her mother, Claire, have never been close as mother and daughter—Teddie’s relationship with her now-deceased father had always been the strong one in the family.

With Claire living next door to Teddie, it’s hard to keep from seeing what each does, and Teddie comes to realize that something is changing in her mother’s life since her father’s death. Is there another man in Claire’s life? It’s not enough that Teddie has to clear her own name of this murder, but now she has to discover what secrets her mother is hiding from her.

Walker is good at setting the stage for both story lines to run parallel with just the right amount of tension and without any distractions.

Walker’s premise is in line with all popular cozies, but it should be said that her writing and story development is top notch. She adds humor at just the right spots, while taking the serious steps to find the true criminal and bring that person to justice.

Throughout the story, Walker talks about the multitude of baked goodies Teddie prepares, and these recipes appear at the end of the book. Surely, anyone who bakes these recipes will do so with Teddie and Deadly Delights in the back of his or her mind.