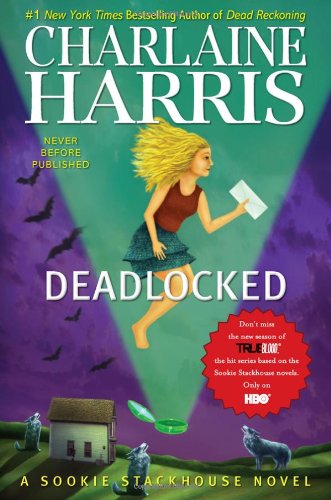 “Unfortunately for eager readers and diehard fans alike they will have to wait an entire year [for Book 13].”

Everything and everyone seems suddenly veering completely out of control. As usual the quirky Sookie Stackhouse is front and center of it all.

It seems she just can’t keep her sweet southern self away from the interactions of those pesky supernatural beings—and who can blame her? She is married to the powerful vampire Eric Northman (at least for the time being) and is part otherworldly being herself.

Since that tiny bit of faerie blood runs through her veins allowing her to read the minds of others telepathically, she seems to always be caught up in the machinations of those that surround her whether she joins willingly or not. In that respect within the somewhat poetic pages of Deadlocked not much has changed. Whether in the world of Faerie, the kingdoms of the vampires, or the restless packs of were, Sookie seems always in demand.

Suddenly her relationships to this out of this world collection of creatures have converged into one and it is a convergence of danger rather than safety.

The killing of the powerful vampire Victor in the previous book, Dead Reckoning, has come back to haunt all who were involved—human and vampire alike. Unwelcome visitors have arrived, including a vamp queen seductress intent upon luring Eric away from Sookie with promises of power and wealth.

As Eric is made vulnerable after an unfortunate feeding incident, the always loyal Sookie sets out to help in his exoneration with an array of characters both against her and by her side—including her former lover Bill Compton.

As the clues fall into place, Sookie soon finds betrayal may surround her in the places she least suspects, and the very foundations of her life may be shaken.

As the otherworldly seem to come together in a plot designed to take everything Sookie holds dear, she must decide whether to fight or become resigned to the fate the supernaturals have decreed.

A powerful object could answer all her prayers—but only if she has the true sight to see what means the most and use it correctly. Will she lose Eric forever or find that the love she has long sought has been by her side all along?

In the latest suspenseful installment of the supernatural world of Bon Temps, Louisiana, worlds collide, setting up the perfect stage for Charlaine Harris’ final words and her ultimate plans for the future of dear Sookie.

With only one book remaining in the series, it’s never been more important for Sookie Stackhouse to follow her heart and discover the path and type of being that she’s destined for. Unfortunately for eager readers and diehard fans alike they will have to wait an entire year to learn just who that being is.