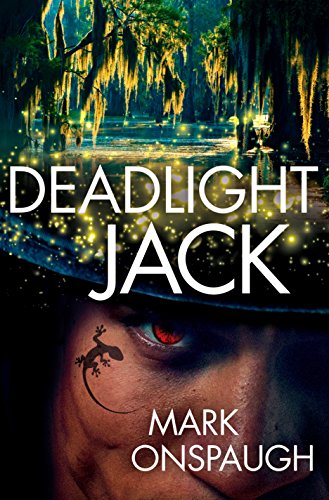 “a chilling reminder that occasionally things going bump in the night often can’t be explained.”

When George Watters was a little boy in Green Water, Louisiana, his grandfather died. As the family gathered after the funeral, George was attracted to a bright and pretty light glowing in the swamp behind the house. It changed into a handsome man in a ringmaster’s suit who tried to lure him away with promises of pirate’s gold and new friends to play with. George’s grandfather tried to keep him from going with the man, which was odd since he knew his Papaw was dead, but then Grandmama came running from the house and chased the man . . . the thing . . .  she called a rougarou away . . .

The next day, George’s mama took him away from Green Water.

Now George is an adult, a senior citizen, living in Washington state. He’s a widower with children and grandchildren, and memories of the pretty light and the man in the top hat are forgotten. George knows the supernatural is real, however, for just the year before he and his friend Jimmy Kalmaku, a Tlinglit from Alaska, fought and battled an entity called the Faceless One and saved a family from destruction.

In gratitude, the family enabled George and Jimmy to leave the nursing home where they lived and move into a real house. George and Jimmy don’t talk about that episode much because friends died during it. Anyway, two old geezers telling everyone they fought a supernatural force intent on destroying the world would get them declared senile . . . fast . . . so, they keep quiet about the greatest adventure in their lives. Only Jimmy’s granddaughter, Molly, already showing remarkable paranormal sensitivity, is aware.

Things are going great, life is good . . . but it’s about to take one of those weird turns it does whenever things are seemingly at their best. . . .

In Louisiana, George’s grandson Donny goes missing in the Atchafalaya Swamp and the family as well as the police are searching. George and Jimmy join in, flying to Louisiana. On the plane, George has a dream . . . of Donny calling to him . . . and knows it’s more than a dream.

George keeps quiet because he’s already had a couple of other disturbing visions. After the Faceless One, he doesn’t want anything out of this world in his life. What he doesn’t know is that Jimmy is thinking the same thing, because his own spirit guides are telling him they going into danger.

Keeping quiet soon isn’t an option, as George’s memories of the green light after his grandfather’s funeral and the top-hatted man resurface. He knows who and what the creature called Deadlight Jack is—a thing surviving in the swamp to lure the unsuspecting and keep them captive until he can devour their souls. The monster was kept under control by Mo’ssa, guardian of the swamp, but somehow he’s now escaped her bondage and is once more preying on the weak.

Knowing what he has to do to fight Deadlight Jack, George goes into the swamp alone to find Donny. As usual, Jimmy soon follows, aided by a creature created and sent by young Molly.

What the two men find would have anyone doubting their sanity, but their combined faith and friendship will hold them in good stead as they again battle something the modern world scoffs at as imagination, but the ancient world recognizes as a danger to everyone. . . .

It’s refreshing to read a story in which the heroes aren’t young, strong, and virile but instead are two senior citizens, old and weary in the ways of the world but still young enough in spirit to have the hope to continue on in the face of adversity. George and Jimmy are good friends, their good-natured japing at each other’s ethnic backgrounds and their courage in each risking everything for the other is evidence of this.

Though this novel is obviously the second in a series, having not read the first shouldn’t be a detriment. It’s self-contained enough to be a standalone, though the various references to Jimmy and George’s brush with the Faceless One are tantalizing enough to pique the reader into seeking out that story also.

The characterizations are realistic; doubtless the descriptions of both George and Jimmy may bring to mind some elderly person the reader knows. Indeed, the entire narrative is set in such a mundane, everyday venue that one might thing it could actually happen . . . that two old men could accomplish what they did . . . even if one is guided by forces he doesn’t understand and the other assisted by “a little creature escaped from a Disney cartoon.”

Deadlight Jack is the kind of tale the reader is cautioned not to read late at night, especially if he lives in the South or near some waterway leading into a swamp or forest . . . and it might be best to close the windows beforehand, as well. It’s an easy read, and that’s makes it less difficult for that disbelief to be suspended . . . the reader is lulled into thinking he’s reading a mere suspense tale before the horrible truths surrounding the will o’ the wisp that is Deadlight Jack is revealed.

These are the kind of tales that cling to the memory because they harken back to the childhood tales and half-remembered stories of our youths. Deadlight Jack is an entertaining read, a thought-provoking one, and a chilling reminder that occasionally things going bump in the night often can’t be explained.