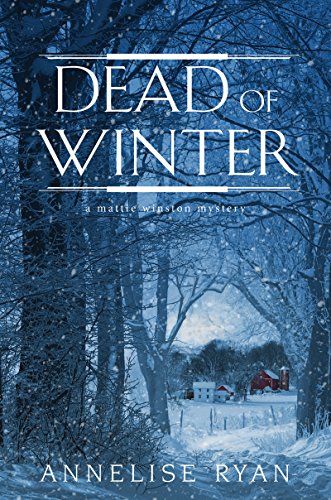 With suspense and medical drama her forte, Mattie Winston, once an ER nurse and now a medical-legal death investigator, deals with the intricacies of investigative and forensic aspects in a job one would consider akin to a coroner. Mattie does more than that. Faced with irregular hours, she is called out any time, day or night, for a suspicious fatality. Her position is to put the puzzle pieces together to ascertain the, who, what, when, where, and how of a person's demise.

Mattie is happy away from her past position after catching her physician husband flagrantly in the act with a colleague. Rescued by her friend Izzy, she is offered the new post as his assistant as well as living quarters at his property.

After attending educational conferences and classes for her employment, she is newly married to detective Steve Hurley, mother to toddler Matthew, stepmom to teenaged Emily, and the owner of a new home. She is content, though the erratic hours, the stress of rearing a rambunctious son, and not enough alone time with Hurley gets to her.

On an early February morning, Mattie stumbles out of bed and receives a call from the hospital about a young girl admitted as "Jane Smith." She rushes to the ER and discovers the child—approximately 18 years old—has been badly beaten and succumbed to her injuries. Later the teen is identified as Liesel Paulsen, who was reported missing more than six months ago.

Mattie relates her story in the first person, automatically drawing the reader in. With a self-deprecating attitude, the subject matter is powerful as well as humorous, as is shown when she attends to Liesel:

"She is small, weighing only 117 pounds, and I feel a flare of anger at whoever abused her, knowing they were likely twice her size. Hell, I'm nearly twice her size, and I feel a tiny twinge of guilt when I realize that Liesel is exactly the kind of girl I used to hate in high school: petite, pretty, and well proportioned.

"I suppose 'hate' is too strong a word for what I felt, but there was definitely some soul-sucking envy, given that I was already six feet tall when I started high school, was wearing a size-40DD bra, and had feet so big that Jimmy Hoffa could have been hiding out in one of my shoes all these years. . .

". . . I inherited my physique from my father, who is well over six feet tall, wears a size-fifteen shoe, and tends toward what my sister, Desi, calls 'thickness.' That's her kind way of avoiding the f -word whenever I start bemoaning my figure. Desi got my mother's build, and when we were kids, she had no compunction about calling me any number of stinging names when she was ticked at me, monikers like 'lard ass,' 'thigh-tanic', and 'gazonga chest.'"

Hildy, the on-call social worker, reports that before the girl lost consciousness, she asked for help to find her younger sister Lily, who went missing just weeks after Liesel. Later, concluding Liesel is a victim of horrific abuse and drug usage, Hildy believes human trafficking is the case, which propels Mattie into action.

Soon Mattie is called to another case when the director of the local theater is found dead, either by accident or murder. She and Hurley check out the scene and interview all witnesses to the casualty, another deal in which an autopsy and intense scrutiny are involved.

Then, blessedly, as Mattie drives Izzy home from work with visions of her warm bed in her mind, they encounter her ex-husband's wife stranded in a ditch in a heavy snowstorm. She is in labor and too far along for an ambulance; Mattie and Izzy deliver her child in the back of Mattie's vehicle, which happens to be a hearse. Thoughts of the past several hours plow through Mattie:

"It's been a hell of a day, starting off with my Mount Vesuvius incident, being shot in the arm by Roberts, the death of Roger Dalrymple, the progress we made in the Paulsen case (though I would have liked to see more of that), and the delivery of Patty's baby. As my mind replays an abbreviated version of all these events, I feel my body grown wearier with each passing image. I'm exhausted, I realize, and suddenly my legs feel too tired to move."

Battling through the blizzard aptly describes Wisconsin's winters: "The country roads still haven't been plowed and it makes for slow going for two reasons. The first is that the snow is accumulating fast. There is a good four inches of new stuff on the ground, and it's still coming down hard and fast. This makes it hard to see where I'm going and hard to see where the road ends and the fields begin. In addition, the wind gusts have created some unusual and unexpected drifts. Twice I nearly went off the road when I hit a drifted accumulation of snow that was a foot or more deep."

The freezing weather and the ominous scenarios Mattie encounters make this a chilling tale of twists and unforeseen happenings, as well as the unrelenting duties Mattie faces while dealing with a normal life. An independent, stubborn, yet feisty protagonist, Maggie is a character others can relate to and acknowledge a kinship with. Though Dead of Winter is book #10 in the Maggie Winston series, one would be hard-pressed not to want to read the preceding titles.