The Dead Republic: A Novel 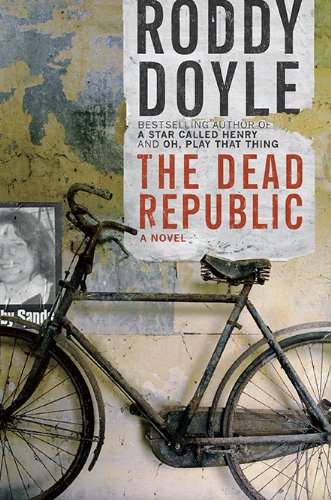 This is the final installment of the Last Round-Up trilogy that began in 1999 with A Star Called Henry and continued with 2004’s Oh, Play That Thing. Spanning nearly the entire twentieth century, the three novels tell the moving, sometimes tragic story of Henry Smart. A Star Called Henry relates Henry’s birth in the slums of Dublin to a one-legged brute of a father, also named Henry, and the young, uneducated Melody. He leaves home at five with his younger brother, Vincent, and grows up on the streets before becoming a central figure in the Easter Uprising of 1916 and subsequently a guerrilla trainer and assassin for the IRA. Throughout the novel Henry is closely linked with real figures from Irish history such as Michael Collins and John Connelly. He meets then marries a teacher only referred to as Miss O’Shea. He loses family and friends before having to escape Ireland altogether in the wake of political shifts within the IRA, leaving a daughter in foster care, and a wife in prison. The second installment, Oh, Play That Thing! finds Henry in America where he again has to drag himself up from nothing to become a man of substance. His way is constantly blocked by the greed of others, the tribalism of organized labor, and gang mentality, until he is recruited by the young Louis Armstrong. This continues the theme of Henry being involved with major figures in history. By the end of this novel Henry has made and lost money, regained then lost his wife and daughter, fathered then lost a son, and lost a leg. The novel closes with our hero being found half dead in the desert by Henry Fonda. The Dead Republic, the final act in the trilogy, sees Henry returning to Ireland in the employ of the film director John Ford, collaborating on a script about his life. Henry has visions of a true representation of the highs and lows of a varied and tumultuous life. He is quickly disabused of that notion when he finds that reality is being sacrificed for conformity and idealism. Henry cannot reconcile the way the movie is evolving with his own views of what he thinks is right so he leaves to settle in a small vision on the outskirts of Dublin. He becomes the caretaker at the local school, meets a woman he suspects is his long lost wife, Miss O’Shea, and tries to live a quiet and simple life. Having firmly rejected violence, he carefully hides himself away from his former IRA associates, but this is not to last. He is inexorably drawn back into that world and finds that he must make choices and decisions that resonate back through time and impact on his closest relationships. While perhaps not reaching the heights of A Star Called Henry, this novel is superior to Oh, Play That Thing! in many ways. Henry is more engaged in his environment and as a result is better realized as a character. Roddy Doyle is a master of the ordinary. His best works, such as The Commitments, Snapper, or the Booker Prize-winning Paddy Clarke Ha Ha Ha, pull the reader into a setting that is essentially real. Doyle knows his real world so well that his imagination is just an extension of it. Perhaps that is why A Star Called Henry and The Dead Republic are more successful and better realized than Oh, Play That Thing! Doyle is Irish. His best novels, characters, and settings are Irish. In The Dead Republic Doyle returns to that which has made him most successful: Irishness. Henry Smart is a man who has stood up for himself, his family, and his country. Inside him there still burns an intense fire of justice and integrity that must be tempered by the world he finds himself in. This is a very recognizable dilemma: conformity versus honor. Henry has to learn how to balance all the disparate elements of his life, how to find peace when he is being pulled in many directions at once. Ultimately it is this ongoing struggle with himself that is the over-arching theme of the novel, and indeed the whole trilogy. Henry has to do what all of us must. He needs to be able to find a sense of himself in a mad and chaotic world that never stands still. This is a marvelous novel by one of the world’s greatest living authors. Whether or not the reader has read the two previous books, The Dead Republic stands alone as a very good work of fiction. Doyle’s language is realistic and accessible, as are his characters and settings. This is an exploration of what it is to be human. There is pain, drama, tragedy, and joy—all wound around a true love story. It is a constant pleasure to be immersed in the works of an author of such consistently high caliber.