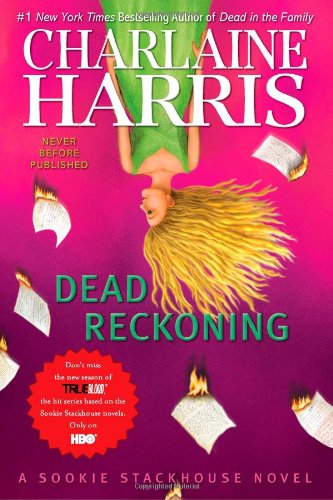 What predicament has Sookie Stackhouse found herself in now? Her vampire boyfriend is plotting the death of his superior . . . and he has a secret he doesn’t want Sookie to know about. Crazy Sandra Pelt is out of jail and planning to kill her. Oh, and her faerie family housemates are plotting something with a bunch of other faerie exiles.

As with the previous 10 Sookie Stackhouse novels, Dead Reckoning is filled with murder and mystery and a touch of paranormal romance. Charlaine Harris’ writing style is easygoing and full of everyday detail. From a trip to Walmart to a stop for a quick chicken biscuit at Hardee’s, Ms. Harris adds in real-life specifics to make the supernatural fantasy more believable. In fact, in at least three places in the story, Sookie does the laundry!

As the novel opens, Merlotte’s is firebombed and anti-were activists are implicated. However Sookie believes things aren’t what they seem. But although that particular subplot opens the book, you soon discover that it is not the main plot.

At home, Sookie is playing host to two of her fey family members, Claude, her cousin, and Dermot, her great uncle. They’ve been spending a lot of time at Claude’s bar, Hooligan’s. Turns out, the bar is a refuge for exiled faerie folk and they’re hiding something. But that’s also not the main plot.

Ever since Sookie got married to vampire Eric Northman, she’s been drawn further and further into vampire politics. The current vampire regent of Louisiana, Victor, doesn’t like Eric and has been provoking him, trying to get him to do something stupid so Victor can kill him without incurring the wrath of their vampire king. Eric and his vampire daughter, Pam, are now plotting to kill Victor in return. Eventually Sookie comes up with the best plan.

What makes the Sookie Stackhouse novels so readable is the juxtaposition of the mundane with the extraordinary. While all the murder, mayhem, and paranormal violence is going on, Sookie still has to do the laundry, clean the dishes, and go to work. She hosts a baby shower, goes shopping, and makes time for her friends (human, vampire, were, and otherwise).

The character of Sookie is so likable in this book and in the series as a whole because of how ordinary she is—despite her unique talent to read minds. She has good friends, family members that get under her skin (who doesn’t), holds an ordinary job, and does ordinary things. It is easy to see yourself in Sookie and understand the emotions she experiences.

Ms. Harris is skilled at not only drawing you through the story and providing a satisfying end to the major plot points; she’s also good at leaving you a few breadcrumbs to make you salivate for the next book. The big mysteries of Dead Reckoning are resolved, but there are a few loose ends that will have you waiting for book 12. In addition, some loose ends from previous books are also resolved—to some degree.

Dead Reckoning is a delightfully readable novel with one major caveat: Don’t read this book out of order. Each book builds on information revealed in the previous ones, and although Ms. Harris feeds you the basics to understand the book you are currently reading, the surprises of prior books will be ruined if you read them out of sequence.