Dead Presidents: An American Adventure into the Strange Deaths and Surprising Afterlives of Our Nation’s Leaders 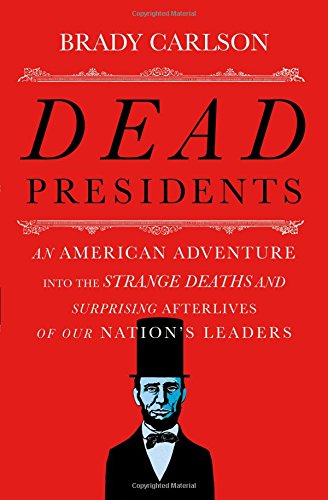 “a delightful excursion into Americana.”

America prides itself as having a "government of laws and not of men," but it has been men who have written those laws since 1789. Our executive, the president, is charged with executing those legislative directives, and he stands alone as the singular representative of all the people.

Many of those presidents have been remarkable men; others have been abject failures. Some have been the subject of fables constructed by their political followers that have little relationship to actual reality. Those truths and tales are retold by Brady Carlson, a National Public Radio reporter from New Hampshire, in Dead Presidents: An American Adventure into the Strange Deaths and Surprising Afterlives of Our Nation’s Leaders.

Carlson is a history buff and a committed traveler. To research this volume, he visited the gravesites of all deceased U.S. presidents; however, the book is more than a travelogue written by a tourist of tombs. It is filled with an abundance of anecdotes—some real, some imagined—about the 44 men who have held the nation’s highest office. Employing a jocular tone on what could have been a morbid topic, Carlson leads us on a lighthearted journey through American history, focusing on how the nation has remembered its chief executives. For any student of American history, it is a splendid expedition.

Carlson organizes his book into themes: untimely deaths, presidential funerals, unintended legacies and the like. Although there are a few new anecdotes, most students of American history will find the contents of the book familiar. What is noteworthy is Carlson’s writing. The narrative will remind the reader of Bill Bryson’s work, a very high compliment. Carlson brings American history alive— certainly much more alive than the dead presidents who are his subject matter.

For example, Carlson relates the story of the death of President James Garfield. Although shot by a disappointed job seeker, the president would have survived but for the inept medical attention he received, literally at the hands of Dr. Willard Bliss who continuously probed the bullet wound with his dirty hands: “What the president needed,” Carlson suggests, “was something to protect him from his doctor.”

Carlson shows his flair as a journalist when he parts from his search for dead presidents to occasionally share some of a president’s lesser-known accomplishments. Herbert Hoover, for example, invented “Hoover-ball”—a game like volleyball played with a medicine ball on the White House lawn while the nation sunk into the Great Depression. Hoover would summon members of his cabinet to take part.

Funerals have played a critical role in formulating our presidents’ legacies, especially if the chief executives died in office. Jacqueline Kennedy controlled every detail of JFK’s funeral, even telling their three-year-old son when to salute his father’s passing casket. The greatest death trip of all was the Lincoln procession by train back to Illinois. His casket was viewed by tens of thousands of Americans. For those presidents who were fortunate enough not to have died in office, one of their responsibilities while in office was to review and approve their own funeral arrangements.

Unwilling to leave their legacies to others—especially the press—presidents in the 20th century began to create “libraries” to house their official papers. In order to encourage the public to visit, these museums came to utilize Disney-type animatronics. A life-sized Lyndon B. Johnson speaks to his visitors, extolling his social accomplishments while downplaying his disastrous war in Vietnam. Before dead presidents entered into the entertainment business, they (or their surviving family members) made sure their tombs were the largest around with appropriate ornamentation.

The demise of a president has offered politicians an opportunity to cement his legacy by naming things in his honor. Anything funded publicly was fair game, including the names of cities (Washington, DC), states (Washington again), airports (JFK and Ronald Reagan), and a host of public schools, towns, and thoroughfares. No president, except Washington, escaped political rivals even after death. The battles that might have plagued their administrations continued post-mortem in the memorial appropriation process.

In his final chapter, Carlson tells the story of the reliefs cut from the stone surface of Mount Rushmore. The land on which the visages of the four presidents—Washington, Jefferson, Lincoln and Roosevelt—were carved was originally territory taken by European Americans from Native Americans. The monument was intended as a tourist attraction, and it has been quite successful in that regard.

Carlson’s book is a delightful excursion into Americana. It is not the work of a trained historian, but, if it were, it likely would not have been as much fun.