The Dead Play On (A Cafferty & Quinn Novel) 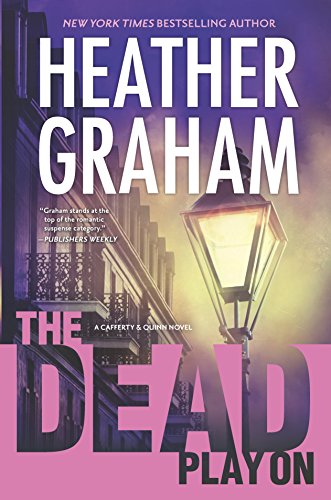 Musicians are being murdered in New Orleans, and it will take the skills of paranormal investigator Danni Cafferty and her partner, P.I. Michael Quinn, to crack the case.

The Dead Play On is the third in Heather Graham’s Cafferty and Quinn series. The novel starts out with a vaguely paranormal experience: ex-soldier (and murdered musician, it turns out) Arnie Watson’s best friend plays Arnie’s saxophone and has flashes of insight into what happened the night Arnie was presumed to have killed himself. He consults with Danni Cafferty in her antique store/paranormal investigation shop, coincidentally on the same day that Quinn was called in to help investigate the brutal murders of two other musicians.

What follows is a light crime novel, as Cafferty, Quinn, and their stock of friends try to figure out who is stalking New Orleans musicians and whether it has anything to do with Arnie’s rumored magic sax.

The Dead Play On is more crime caper than mystery. Despite awkward views into the mind of the killer, red herrings and suspects don’t start to emerge until two-thirds of the way through the novel.

There are various twists and turns, but when the ultimate killer is revealed there is no thread that a reader could have followed to have figured out the case, and all of the suspects seem to have been randomly chosen from a large cast of characters, none fully fleshed out. A stereotypical Scotsman, Arnie’s “poor, proud, wise, Black” parents, and a pretty much completely irrelevant Catholic priest and voodoo priestess round out Cafferty and Quinn’s stable of intrepid investigators and potential victims.

Lead characters Danni Cafferty and Michael Quinn interact much like junior high kids: there are silly misunderstandings, a lot of sexual innuendo, and a single sex scene. To Graham’s credit, she does avoid the graphic language that has come to pervade women’s fiction (and which could put off her core audience) without resorting to laughable euphemisms. Their characters are romantic stock: Danni is an artist/spunky girl, Quinn is a bad boy-gone-good, and both are incredibly beautiful.

It is confusing that a story which starts with a paranormal aspect has nary a whiff of the paranormal afterward. Though that aspect is continually referenced, it plays no real part in this story. The “mystery” is altogether rational, and the characters toddle their way to the end without much happening between the graphic murders at the beginning and the expected race to the end.

The Dead Play On is an inoffensive whiffle of a crime novel. Romantic and paranormal aspects are perfunctory, but there is nothing to trouble anyone too much—call it Nancy Drew for grown ups. Fans of Graham will likely find her return to familiar characters comforting, but new readers might want to skip this one.