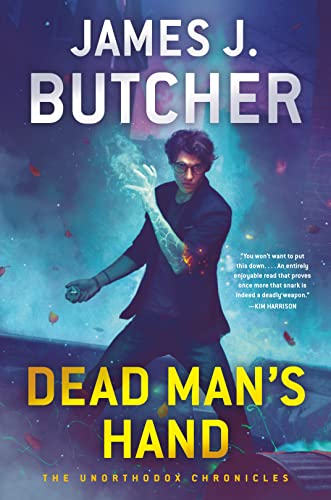 “Butcher manages to create relatable, believable characters with real flaws, real needs and wants, fleshing them out with tongue-in-cheek humor.”

A witch (think wizard, sorcerer, magician, etc.) with the improbable name of Grimshaw Griswald Grimsby works at a fantasy version of Chucky Cheese. He entertains children for a living and really hates his soul-crushing job. His life is miserable, unfulfilling, and bleak because he failed in an attempt to become an auditor, an agent for the Department of Unorthodox Affairs. That failure has tarnished his life and has destroyed his self-esteem.

This is the set up for Dead Man’s Hand, the debut novel by James J. Butcher, the son of the renowned fantasy author, Jim Butcher.

In a world where magic is real, the DUA monitors the use of magic and the machinations of magical beings. It is a terrifying, dangerous job and Grimsby wants it badly, but instead he dons a pink tutu, complete with taco wings, and enchants mannequins to entertain kids at Mighty Magic Donald’s Food Kingdom where the food is barely a step up from industrial waste. He dreams about the job he almost had with the DUA, but he washed out because Auditor Mansgraf felt he didn’t have the chops.

Now Mansgraf, possibly the most powerful witch in the DUA, has been murdered, using the last of her blood to scribble a note implicating Grimsby. Mayflower, Mansgraf’s retired former partner, is also dragged into the case believing Grimsby somehow killed her. Tough as nails, harder than a two-dollar steak, Mayflower sets his sights on killing the man who murdered his ex-partner. There’s just one problem: Grimsby didn’t do it.

So begins the adventure that includes auditors, a surly Mayflower, the DUA, monsters (including one that reminds the reader of a malevolent Edward Scissorhands on meth), and an alternate world only witches can see called the Elsewhere. Grimsby endures pain, humiliation (worse than working at Mighty Magic Donald’s food kingdom) and an excruciating trip down memory lane. All this in an effort to prove his innocence.

Butcher manages to create relatable, believable characters with real flaws, real needs and wants, fleshing them out with tongue-in-cheek humor. This can be difficult for experienced writers, so the fact that Butcher achieves this in his debut novel is outstanding.

As for the world building, it is easier to do when the writer has a framework (such as Earth) to add to, and Butcher does it well. Although said framework sometimes feels a little sketchy is no great flaw, what is built manages to bring the action and magic system to life in the mind of the reader. This is a roller-coaster fun book that will have the reader waiting impatiently for the next Grimsby tale.