Dead Letters: An Anthology of the Undelivered, The Missing, The Returned 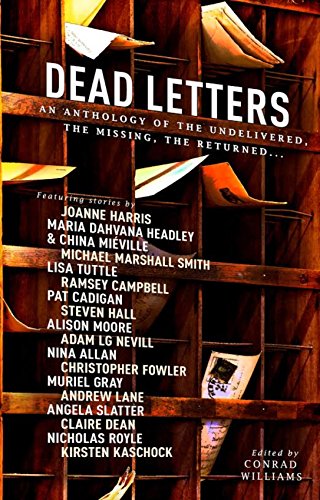 Anthologies are often a mixed bag of styles and themes. In the case of Dead Letters, editor Conrad Williams gave his authors prompts in the way of items they needed to incorporate into their tale. It gives the collection the feel of a connected set of stories in a way that many anthologies can’t pull off with just a theme, namely in how distinctively random each item seems, and the texture they add to the tales in this delightful collection.

The Dead Letters Office in England is where mail goes to die when it cannot be delivered to its intended receiver. The theme is very noticeable in some stories, while in others it is only lightly touched on, either with a brief mention of a letter lost or a lost letter found. Stories such as China Miéville and Maria Dahvana Headley’s “Ledge Bants” are set inside the office, using fictional employees as fodder, while in others, such as Lisa Tuttle’s “The Hungry Hotel,” the Dead Letter Office isn’t mentioned at all since her story is set inside the United States.

The overseas settings might not be so noteworthy to those who live across the pond, but to most horror and dark fiction readers, it is a welcome respite from overused locales in New England or the Deep South. What is also a breath of fresh air is that every single story in this collection is high quality and set apart from traditional horror fare with original, fresh themes.

It would be difficult to criticize any of the stories in the collection, because all of them were skillfully rendered. If anything, readers might find some of the tales not to their liking due to style preferences alone. For example, “Wonders to Come” by Christopher Fowler is a bit dry, with lots of technical information that leads up to a scenario in a hotel that just feels wrong. Fowler’s ability to conjure an atmosphere that conveys tension and suspense is well done, yet the character’s reaction toward the rock-like creatures causing chaos with the equipment in the hotel isn’t credible, an issue that actually adds to the tension of later scenes. Again, “Wonders to Come” is a story that might not please every reader yet was still well done.

Notable standouts in this collection were Ramsey Campbell’s “The Wrong Game,” where he has written himself as the main character, retelling editor Conrad Williams a tale of a mysterious card player Campbell met at a convention who passed away and left him two cards as a token—or perhaps a reminder. The tale is brilliant and terrifying. Campbell’s ability to build suspense and terror together, blended with beautiful prose and startling imagery, is no doubt why he is considered the most famous horror author in the UK.

“Is-And” by Claire Dean is a mix of small town horror and fantasy. A woman accompanies her new boyfriend, Gareth, back to his home on a small island. Small villages are notoriously close-knit and distrustful of strangers, but it becomes obvious to the narrator that Gareth’s mother and the strange denizens of his hometown are hiding something.

As the narrator digs into the clues, she becomes more and more unsettled about what she finds. The tale is so tightly written, the conflict and tension perfectly balanced between Gareth’s stonewalling and his mother’s cryptic, vaguely threatening warnings and the breadcrumbs that the narrator finds toward the truth. Like most of the stories in Dead Letters, the ending was incredibly satisfying, yet not the happy conclusion that most might expect. Readers who demand tidy endings where the protagonist wins will not enjoy this collection.

“Buyers Remorse” by Andrew Lane is another standout, a Lovecraft-inspired tale set in a small village in England. The protagonist receives a package in error due to a smudge on the address, and decides to deliver it himself. What is found at the destination is a market where ancient “antique” items of intangible worth are not sold, but traded. The horror element is ramped up in this story, with plenty of well-paced tension and a satisfying conclusion.

Those who enjoy dark fiction and horror should pick up this collection, not just for the quality of the stories, but also to discover new authors that will be the future of the genre. The contributors to the anthology are a mix of veterans and new talent, but all of them have a bright future ahead if they continue to produce work on the same level as the quality and creativity found in Dead Letters.