Dead Harvest: The Collector Book One 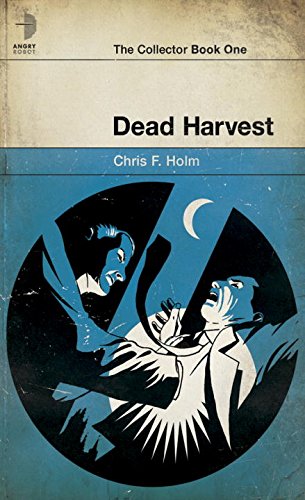 “. . . urban fantasy treasure . . . With a candid style that exhibits solid confidence and finesse, Chris Holm pulls readers in and pins us to the edge of our seats with a cleverly conceived story that is flawlessly executed.”

Sam Thornton is a soul collector. After having his own soul collected more than 60 years ago, Sam has resigned himself to his lot in life. Dispatched on another routine collection—this time for the soul of Kate, a young girl who savagely murdered her family—Sam reaches in to take her essence, and is thrown back by the force of the beauty and light within her, leaving Sam in a precarious and dangerous position: refusing to finish the job.

To take an innocent soul would be to start devastating war between Heaven and Hell; however, finding the proof to support his claims will be nearly impossible given the existence of a reliable eye-witness account, not to mention that the powers-that-be are demanding her damnation.

Sam puts everything on the line—for himself and the world at large—as he tries to get to the bottom of Kate’s plight. With no one to trust, Sam is alone in his endeavor, save for the allegiance of Anders, a teenage boy who has been deemed unstable and medicated due to his ability to see beyond the human façade of demons.

Sam’s rogue efforts will result in serious consequences should he fail, but only time will tell if he’s on the right track or throwing it all away on blind faith.

Intertwining Sam’s current life with that of his late 1940s human past, Chris Holm beautifully contrasts Sam as the man he was and the entity he came to be, while perfectly preserving Sam’s impervious humanity—for a demon, Sam is quite conscientious and, despite his vocation, rather endearing.

Author Holm’s perfectly pitched and finely tuned prose sets the rapid pace that continuously unfurls intense action that never falters. The danger escalates as Sam navigates a multitude of obstacles and challenges that are flung in his path at every opportunity, each one threatening to subvert his mission at every twist and turn.

Those with a keen eye will note the subtleties that grace the pages of Mr. Holm’s ode to all that is pulp and noir from naming the protagonist Sam, to the title—a nod to Dashiell Hammett’s Red Harvest. Yet you need not be a fan of gumshoe to get the most out of this read.

Would-be readers should take heed of the old adage not to judge a book by its cover, as the one chosen for Dead Harvest may be quite puzzling at first glance to all but hard-boiled fans of noir. Containing relevant imagery, the old-school styling reflects that of a nostalgic mystery, while potentially masking the modern richness of the urban fantasy treasure within.

With a candid style that exhibits solid confidence and finesse, Chris Holm pulls readers in and pins us to the edge of our seats with a cleverly conceived story that is flawlessly executed.