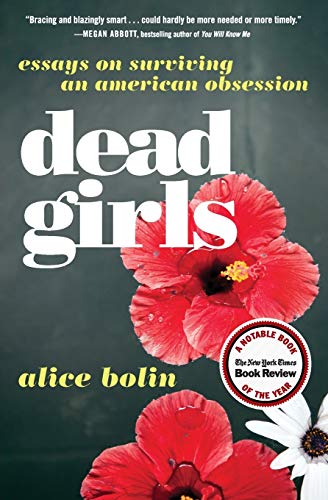 The trope of the murdered “dead girl” serves as a catalyst for many popular crime narratives, from bestselling thrillers to limited TV series to true crime podcasts. In her wonderfully unsettling and frank debut essay collection, Alice Bolin investigates how murdered women, specifically murdered white women, create the occasion for men to tell their stories and affirm their masculinity. She questions why we, as a culture and she individually, are drawn to these stories: What does the dead girl narrative tell us about ourselves?

The dead girl, she argues, is a way for men to validate their role as savior, if not of a woman’s life, then of her purity, her memory, the idea of her. The trope then produces male-centric storytelling. She cites Raymond Chandler’s hard-boiled protagonist Philip Marlowe and David Lynch’s quirky Agent Cooper from Twin Peaks, and more recently, Rust Cohle and Marty Hart from HBO’s True Detective. To the straight white male, she writes, “The white girl becomes the highest sacrifice, the virgin martyr, particularly to that most unholy idol of narrative.”

Her collection begins with an analysis of this trope, then gradually evolves into a kind of bildungsroman by way of pop culture. Bolin explores her intellectual and emotional growth through her twenties using cultural touchstones, from Britney Spears to Dateline to Joan Didion to Shirley Jackson to the horror film Ginger Snaps, to expose her strength, vulnerability, and complicity. Some readers may find this shift frustrating or even self-indulgent, but to me, it’s resonant—the rich and complicated direction an exploration like this must take.

In subsequent essays, Bolin explores her relationship with Los Angeles. It’s a place of multiple mythologies: it’s the land opportunity, the celluloid dream; it’s Didion’s L.A. of Charles Manson infamy and “the rapture of the freeway”; it’s even Spears’ L.A. of pop stars and paparazzi meltdowns. For Bolin, it’s place that defies the stories told about it. Like the dead girl, it’s deeply American and deeply problematic—a realization that she slowly, even painfully, comes to.

In the final section of the book, “Accomplices,” she implicates herself by challenging her self-deceptions. She critiques her hero, Joan Didion, addressing the famous writer’s blind spots, particularly in perceiving racial inequity and in becoming the thing she criticized: a cultural idol, a mythologizer.

She also awakens to her co-dependent romantic relationship, which seems symptomatic of her time in LA, and ends it. As she grows intellectually, she discovers cultural influencers, writers, and philosophers who speak more directly to her, notably James Baldwin and Rachel Kushner, the author of The Flamethrowers. Eventually, she understands that “the only way to grow up is to realize that the little tragedies that shock and devastate you are actually universal and inevitable.”

Bolin’s strength as a writer is equal parts her intellectual rigor and her openness. She takes a strong and intriguing critical stance, and then positions herself alongside her subjects, her life mingling with what she’s read and observed, not detached. In one of the final passages, she writes, “How can I use the personal essay, instead of letting it use me?” The answer is in the asking, her book serving a particularly absorbing example.

John Copenhaver's debut novel is Dodging and Burning: A Mystery (Pegasus Books, 2018). He has been awarded an Artist Fellowship from the D.C. Commission on the Arts for four consecutive years and his award-winning short fiction has been published in various venues. He is also an English teacher and department chair at a college preparatory high school outside of Washington, D.C.