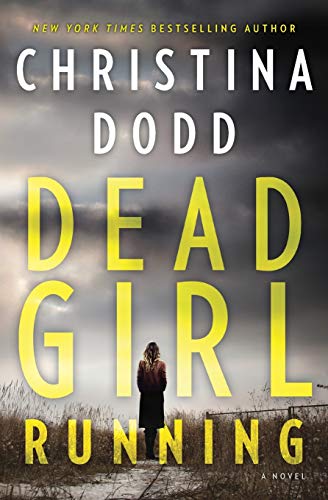 Christina Dodd’s latest book Dead Girl Running has an interesting premise: a woman is looking for a home, a job, and her own history. Kellen Adams is not Kellen Adams, and she knows it, but can she keep others from discovering her secret?

When hired as Assistant Manager at Yearning Sands Resort on Washington State’s Pacific Coast, she is as far away from her life in Maine as Cecelia Adams, her real self, can get, and she is certain she has found her home.

But can Cecelia truly escape? Her cousin, Kellen, sacrificed herself when Cecelia’s abusive husband killed her as she tried to help Cecelia escape Gregory Lykke’s torment and that of the Lykke family. Cecelia and Kellen looked enough alike to pass for sisters, and when Gregory discovers Cecelia’s attempt to escape, he kills Kellen (mistakenly thinking she is Cecelia) and commits suicide at the same time.

Cecelia adopts Kellen’s identity, and her mysterious journey with a new identity begins. She loses one year of her life, joins the military, and when her military history ends with an honorable discharge, she employs her knowledge of self-defense as she settles into her new life.

But it does not take long before that new life crashes around her when she discovers a woman’s dead body, and it turns out that the woman is Priscilla Carter, Kellen’s predecessor at the resort.

Dodd develops a large cast of characters in the book, and she gives Kellen visual memory. Kellen has the ability to create mental files of people she meets, and can recall those files in an instant. Because of the number of characters—some employees, some guests, some others—the reader can revert to these descriptions when suspects begin to surface.

Kellen informs Annie and Leo DiLuca, the owners of the resort who left on vacation and left Kellen in charge, of the gruesome discovery, and they immediately send their nephew, Max DiLuca to take over the security role while Vincent Gilfilen, head of security, is on vacation.

Nils Brooks, Max DiLuca, Mara Phillipi, Carson Lennex, Martin Ngyun, Vincent Gilfilen, just to name a few of the characters, may not be what they seem as the search for Priscilla’s murderer moves forward.

As Kellen continues to search for Priscilla’s murderer, Nils Brooks, a nerdy little writer reveals himself to Kellen as a government agent working for the MFAA (Monuments, Fine Arts and Archives). He informs her that the resort is being used as a pass-through for a smuggling activity, and he solicits her help in finding the head of the smuggling ring known as the Librarian. He informs Kellen that the smuggling is not drugs, but ancient artifacts worth millions of dollars to unscrupulous, wealthy collectors.

As the plot thickens, Kellen experiences moments when her memory of a lost year begins to resurface, and with it the realization that Max DiLuca played a role in that year—but what was that role? Unanswered questions nag at her.

Suspects begin to pile up in Kellen’s mind when she discovers that Vincent Gilfilen never went on vacation, but remained behind to do his own investigation of the murder and the Librarian!

Through this all, the Librarian is making his or her own marks on the resort, as Vincent begins to get closer to the truth, he is viciously attacked and almost murdered; Lloyd Magnuson, the incompetent police officer charged with taking Priscilla’s remains to the coroner disappears, along with the remains.

As Kellen gets closer to the truth, the tension and conflict ramp up—both on a personal and a professional scale. Kellen’s mind begins to open up and her lost year begins to surface to clarity. And what about her deceased husband, Gregory Lykke . . . or is he deceased? Another character and another muddle in the maze.

Dodd does a good job of weaving an intricate web of suspicion around the many characters she has created. This could be classified as a “thriller” were it not for the all too often cute little things she added into the story that at times diminish the tension.

She sets the stage for several characters to be the Librarian, but does not drop enough crumbs for the reader before she brings the real culprit to the fore. The true criminal comes as a surprise, and when looking back at the clues, there is nothing to allow the reader to make a logical discovery, even after the fact.

Having said that, the story is good. It’s a fast read, and all the loose ends are tied up for a neat conclusion. Dodd does a good job of ratcheting up a lot of tension and conflict, especially at the end, as it should be.

The story leaves one asking if this is the start of a new series with several of the same characters and the same location, much like a Murder, She Wrote story. If it is the start, the series should be worth following.