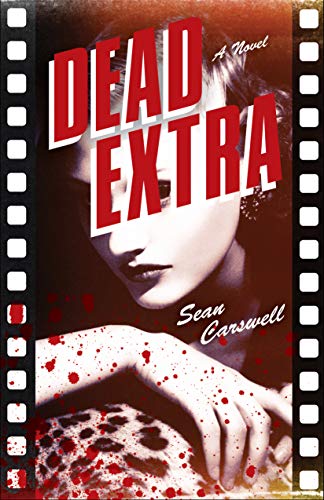 “With more than a tip of the fedora to those masters of crime noir, Chandler and Hammett, Dead Extra paints a post-war portrait of corruption and violence in the land where fantasy rules.”

It’s 1946 and former policeman Jack Chesley, Jr., has returned to Los Angeles. Jack had the bad fortune to become a prisoner of war after his plane is shot down over France. Mistakenly declared Killed in Action, he’s released at war’s end, coming home to discover being a POW isn’t the worst thing happening to him.

Everyone thinks he’s dead and so did his wife, Wilma, who went a little wild upon finding herself a widow. She moved, she attended a few wild parties, picked up a few men. That wasn’t the bad part, however. Jack could understand grief making people act crazy. He was doing it now himself, for Wilma is dead, killed by a fall in the tub—or so the police report says. Her twin sister, Gertie, says otherwise. Wilma was murdered, and she urges Jack to find out what really happened.

Jack is hesitant to do this. In spite of the war, he’s basically a low-key guy, not cowardly, but reluctant to resort to violence.

“Most men can’t shoot to kill but Jack was one of those who could. It wasn’t that he didn’t want to find out what happened to Wilma or that he didn’t want her killer to pay. He just feared the horror show once he did find out. He wanted the killing to stop. Forever.”

Urged by Gertie, Jack falls back uneasily into his profession of being a P.I., doing his own digging into the events happening while he was sitting in a German POW camp—and what he finds he doesn’t like.

He learns Wilma was committed to a Camarillo mental hospital by his father who’d never liked his daughter-in-law, a hospital where questionable practices were carried out involving men with money and prurient tastes.  Some of the local police, men his father called friends and Jack considered his as well, are involved. Now friendship, even kinship doesn’t matter, because Jack has become a target, and if he doesn’t cease his snooping, he may be joining Wilma in that family plot in Evergreen Cemetery.

It doesn’t matter, friend or not, relative or not, those who killed Wilma are going to pay.

Though set in the post-war present and told from Jack’s point of view, the flashbacks of what actually happened fill in most of the plot. This is definitely a crime noir in tone and description except for one factor: women carry a good deal of the story. Neither femme fatales nor the girls next door, they are women existing in a war-torn world in which most of the men are gone, and those remaining are either on the wrong side of the law or too weak or afraid to fight back.

Even Jack, in his quest for the truth, has to occasionally be prodded into action by Wilma’s twin.

These females show ingenuity and a grittiness not usually depicted in this kind of novel, and Wilma, though she’s killed because of that very show of strength, fights to the bitter end.

Once Jack returns to pick up the narrative, the story moves along as a typical noir mystery. Dead Extra explores the nebulous land that is Hollywood in the late ’40s. With more than a tip of the fedora to those masters of crime noir, Chandler and Hammett, Dead Extra paints a post-war portrait of corruption and violence in the land where fantasy rules.