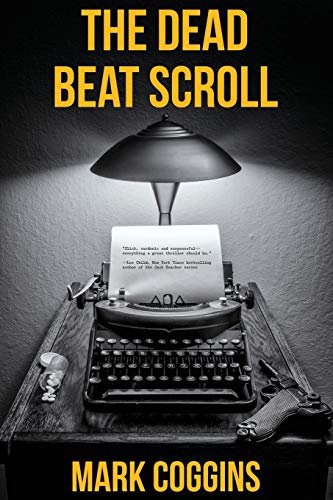 “The Dead Beat Scroll is a delicious casserole of crime noir. There are femme fatales galore, as well as henchmen and crime bosses—all stirred into a glorious potpourri of violence, black humor, a dash of sex, and a hunt for a lost manuscript adding forbidden allure.”

Receiving a message from Lieutenant Kittridge, of SFPD Homicide—not one of his favorite people—Private Investigator August Riordan is floored to be told that his former business partner, Chris Duckworth, is dead.

Chris is the reason Riordan’s back in town. His secretary, now Chris’ business partner in Duckworth Investigative Solutions, had called to tell him she hadn’t heard from Chris in days and couldn’t find him. Kittridge’s call comes shortly afterward.

Now Riordan takes over, intent on determining why Chris, who was gay, would’ve gotten himself killed in a massage parlor. His last client can offer no explanation, and his current one, Angelina Evangelista, isn’t much help, either.

“I was trying to find my half sister. Maybe it’s silly at my age, but I thought reconnecting with Corrinne would make me feel part of a family again.”

Chris had told her it was a job for a “meat-eating dinosaur PI,” exactly as Riordan calls himself. He barely knows how to type, much less handle a computer, and Chris has turned the office into an electronic miracle—“keyboard and phone replacing shoe leather and muscle.”

Riordan doesn’t see how something as easy as finding a lost relative could lead to murder but it does—and not one, but a second. After a few run-ins with past clients who aren’t anything this old dinosaur can’t handle, and being shot at by persons unknown for reasons even more undetermined, he finds Angelina’s sister.

The only problem is, the lady is dead in the renovation wreckage of her home.

“At least there was no longer any mystery—lying facedown on the plywood was the flaccid, almost puddled body of a woman.”

That’s also where he finds a very good motive for the deaths that have happened, as well as for those to come, hidden in an old olive oil tin.

“It was a half-gallon tin manufactured in the 40’s or 50’s. Inside was a roll of paper, a series of strips taped together. Covering the paper was manually typed text. It was entitled “The Beat-hive” and it was wild, really wild.”

The house in which Corrine White died is where Jack Kerouac wrote the last draft of On the Road and Visions of Cody, “based on sessions he taped while living in the Russell Street house.”

“Is it possible he worked on something else besides On the Road and this Cody book?” Riordan wants to know. “Did he ever use long strips of paper taped together in a sort of continuous scroll?”

The answer to both questions is “yes,” and Riordan finds the answer for all the violence and death.

“A newly-discovered Kerouac manuscript would be quite valuable, as a collector’s item and a new work to be published. No doubt many current-day Beats would see it as a holy text. If you’re wondering if someone would kill for it, to the right sort of person—or the wrong sort—murder would be a small price to pay.”

Add in a polyamorous family from Canada that definitely is the wrong sort, the angry leader of a local Chinese gang whose mama-san is one of the victims, and Riordan has a good chance of becoming the sixth corpse in the story.

After reading the opening two pages, the reader will immediately be assured he’s definitely found a crime noir novel. It begins with one murder and ends with another, and in between there are several more deaths, beatings, gunfights, and a treacherous female or two.

Following the determine course set by other novels of this genre, Riordan is a loner with a past. He’s abandoned his practice to his partner and left San Francisco following a previous case resulting in some deaths that won’t go unpunished.

With a bit of a hat tip to The Maltese Falcon, Riordan’s partner is killed and he returns to take over the case, with enough mayhem and more murders following to have satisfied Sam Spade and Mike Hammer.

In between is woven the story of the search for Jack Kerouac’s missing maniscript, The Beat-hive, and the lengths someone would go to in order to possess it.

The Dead Beat Scroll is a delicious casserole of crime noir. There are femme fatales galore, as well as henchmen and crime bosses,—all stirred into a glorious potpourri of violence, black humor, a dash of sex, and a hunt for a lost manuscript adding forbidden allure.

With plenty of landmarks mentioned for authenticity, and enough history to whet the appetite for learning more about Kerouac and the Beat Generation, there are also illustrations of various scenes visited by Riordan during his investigation, making this story by award-winning author Mark Coggins certain to please the mystery fan.

Read The Dead Beat Scroll, and enjoy again the type of mystery novel that defined this genre.