Dead Air: A Novel of Suspense 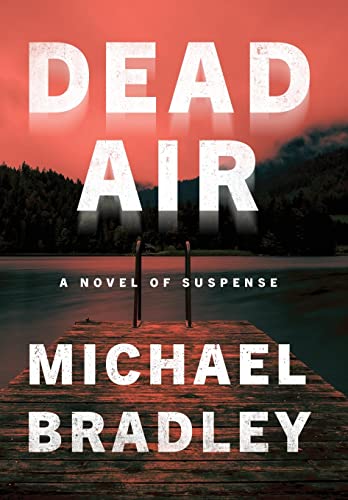 “With its crisp and elegant plotting and prose, Bradley’s Dead Air gives not just the dedicated fan of mysteries/thrillers a diverting and absorbing tale.”

In Dead Air, author Michael Bradley doesn’t just supply readers with thrills and mystery; he adds an element of—for want of a better way to describe it—rather ghoulish fun that elevates this novel above the best examples of the suspense genre.

Kaitlyn Ashe is Philadelphia’s most popular radio DJ. Her show “Love Songs at Ten” offers listeners a chance to call in and make a dedication to a loved one. Her Friday night shows feature an anti-dedication evening for sending out a serenade to someone remembered less than fondly. Kaitlyn has an attorney boyfriend and a charming house.

She is not who she seems to be, right down to her name. She has a horrible secret, and there is someone out there who knows all about it. Kaitlyn has been getting letters reminding her of what happened in “the Shallows” and asking her to play a song by REO Speedwagon.

Bradley opens his novel with the urgency of threatening communications that began to arrive once a week a month ago and are now arriving daily. There is an anniversary of some event coming up, and it is not a happy one. Kaitlyn hasn’t told her boyfriend or anyone else anything about her past.

Even as Bradley is adept at keeping the tension of his story at a consistently compelling level, the fun begins right away when Kaitlyn leaves her late shift show to go home. Anyone who has seen a Hitchcock movie or read anything by Raymond Chandler will find it very hard to not literally yell at the page or the Kindle, “Kaitlyn! Do NOT go into a parking garage at night!”

Several chapters are told in the first person, present tense, in contrast to the remainder of the novel. The narrator of those chapters is the person who is sending Kaitlyn the letters. With this device, Bradley makes the motivations and actions of the villain, if by no stretch forgivable, surprisingly understandable. No mean feat, that.

Bradley metes out clues subtly, at a pace that keeps Dead Air a true page-turner. There is reference to “the night Jesse died.” Kaitlyn is haunted by memories/dreams of a dark pool of water and hands grabbing her. All the unknowns surrounding Kaitlyn and her past are not the only fears in Philadelphia. The city is in the grip of the GBT Strangler, who is killing gay men.

Bradley populates Kaitlyn’s world at the radio station with an entertaining cast of characters. Indeed, it is Kaitlyn’s relationships, not just with her coworkers, that add a poignant element to this story.

During one of Kaitlyn’s shows, her stalker calls in and asks for that REO Speedwagon song. It’s a great take on the classic film “Play Misty for Me.” Bradley’s use of cinematic elements in his story is deft and entertaining.

Incidents with the stalker escalate, as they tend to do, and so the police and detectives must be brought in. Rodney Shapiro and Julie Lewis work as a team to solve the mystery.

Rodney is startled to see that Kaitlyn looks like his daughter Carol. He hasn’t seen Carol in two years. She is in jail for vehicular manslaughter, having driven drunk one night. Rodney found the evidence and turned her in.

Rodney reads Bertrand Russell, among other philosophers. On his own, he is a captivating character, and his relationship with Kaitlyn is a big part of what makes this more than a standard crime novel.

Bradley offers red herrings along with his clues. A Volkswagen Beetle appears and reappears at critical moments, but more than one character drives that kind of car. Cameras have secretly been placed in the hotel room where Kaitlyn is hiding, but by whom? At least one of Kaitlyn’s co-workers is a suspect in her torment.

And add to the aspect of fun the times when Bradley sets up an encounter or a plan involving secondary characters that may inspire the reader to think, “Uh oh, he/she is gonna die.” That these predictions will not always be correct is a key factor in the story’s high level of suspense.

Dead Air has a terrifying ending with twists that are both mandatory and meaningful. It is especially satisfying when Bradley adds issues of what justice and culpability really are that have no easy answers. And throughout, he offers keen observations on universal emotional truths, as in his description of grief: “Loud, violent bawling had alternated with stoic silence.”

With its crisp and elegant plotting and prose, Bradley’s Dead Air gives not just the dedicated fan of mysteries/thrillers a diverting and absorbing tale.