Days of Awe: A Novel 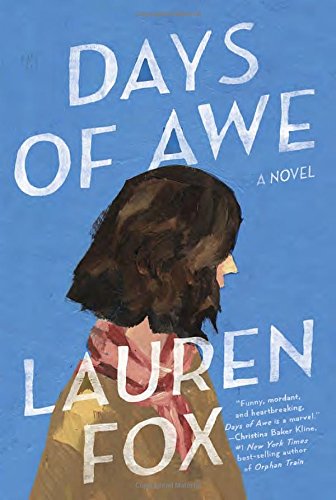 Can a narrator with a breezy stream of quips effectively tell the story of how her marriage fell apart after her best friend died in a spectacular car accident?

There are wonderful one-liners throughout Days of Awe, the new novel by Lauren Fox, a veteran and snappy chronicler of the domestic scene. A nursing home is “a brick-and-concrete fortress against whimsy.” Noticing that stuffed animals no longer fill her 12-year-old daughter’s bedroom, the narrator, Isabel Moore, wonders, “Has there been some kind of teddy-bear Rapture?”

Presumably, Isabel, a middle-school English teacher in Milwaukee, is wielding such witticisms to keep her pain at bay. And for the most part, the plot, writing, and likable cast of well-described characters in this novel easily draw the reader along.

But ultimately, the contrast between the story and the voice telling it is too jarring.

Isabel and Josie Abrams, a history teacher at the same middle school, are so close that their friendship is “an electric thing humming and buzzing.” Josie knows exactly what Isabel needs after her most recent miscarriage (to get drunk).  Isabel introduced Josie to the man Josie would marry – Isabel’s childhood buddy Mark.

As well, Isabel seems to have a strong marriage (and great sex) with Chris, an easygoing, handsome scientist who monitors tree diseases for the state Department of Natural Resources. While Hannah, their daughter, is transitioning into teen cantankerousness, she is basically smart, sociable, and loving.

However, after a near-catastrophe due to her carelessness on a school field trip, Josie seems to be slowly unraveling. She skirts closer and closer to ever-more-dangerous edges: She calls a student a bitch. She shoplifts a coat. She cheats on Mark.

Even a year after Josie’s death—soon after the novel begins—Isabel is still so shaken that she pushes away both Chris and a possible new love interest, Cal, a diabetes researcher.

The Cal interlude is one of the book’s few missteps. Cal may be 17 years older than Isabel, but why would Isabel possibly think that her long-divorced mother is flirting with him? It’s obvious that her mother is actually trying to set up Cal with Isabel. (And does the author really believe that a 42-year-old woman would turn down a handsome, smart, funny, single, professional, straight, 59-year-old man for being too old? If so, she obviously has never been in Manhattan.)

Certainly, the world needs more good jokes. It’s a pleasure to watch Fox avidly and intelligently play with the English language. So readers should enjoy Days of Awe, at least until its tone bothers them.

As Isabel finally learns, it’s okay to laugh, even in the midst of pain.