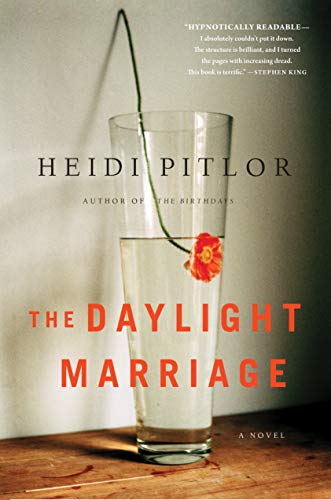 “a slow plodding ride down a comfortable track. . . . it could have been much more.”

The Daylight Marriage is a novel about a married couple who no longer excite each other and have cocooned themselves into separate worlds.

The husband, Lovell, is an introverted scientist who gets more aroused by the possibility of predicting hurricanes, than interacting with his attractive wife, Hannah. Her interests are their kids and her work. It seems that after years of marriage, the only thing the couple has in common is their two children, although Lovell mostly ignores them.

Hannah and Lovell live an uneventful mundane life. Each become withdrawn and seem to speak to each other only when forced to do so. One day an argument ensues over something inconsequential, and afterward, Hannah turns up missing.

At first, Lovell, thinks his wife is simply blowing off steam and staying with a friend or relative; however, as the hours turn into days, he realizes her disappearance may not be as deliberate as he once believed. During her absence, Lovell begins an introspection of his life with Hannah and concludes the situation was a disaster waiting to happen.

The book’s chapters alternate between describing their troubled marriage and Hannah’s movements after she leaves Lovell. The problem is the story is rather bland. Neither character has any zest—Hannah works in a flower shop and Lovell is a climate scientist—both are about as interesting as a blank chalkboard.

The couple’s daughter, Janine, provides most of the buzz and drama. She’s a typical teen, confused by life, and always at odds with her parents. After her mother’s disappearance, she befriends a gay couple living next door and spends much of her time with them. Lovell allows her to come and go as she pleases, even though she drops hints that her relationship with the male couple may lead to an undesirable consequence.

The book becomes most interesting when the police begin to discover clues about Hannah’s situation. They inform Lovell his wife’s bracelet has been found on a beach, then her wallet, and later, body parts are discovered that may or may not be Hannah’s. It seems the DNA testing to determine an answer drags on forever.

At no time is Lovell considered a suspect, something I think would have made the story more interesting and credible. In most cases where a spouse turns up dead or missing, the husband is always the prime suspect. Not so here. Moreover, the cops don’t seem to take much of an aggressive posture in the investigation, even after clues begin to point to murder.

The Daylight Marriage is like a train that never seems to gather steam and charge forward. Instead, it takes a slow plodding ride down a comfortable track. Too bad, it could have been much more.