The Day I Die: The Untold Story of Assisted Dying in America 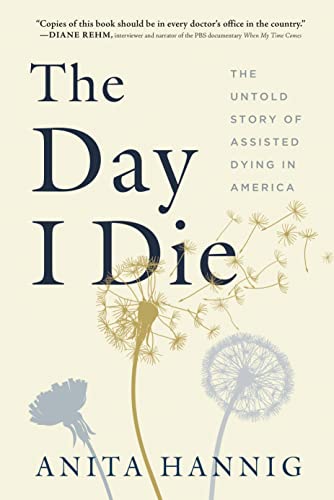 “The Day I Die is an informative and accessible addition to the literature of death and dying. Hannig, as an anthropologist, explores the various roadblocks and challenges facing individuals who seek to die with dignity.”

Death, like birth, is a serious thing. Fear of death remains primal. In the words of comedian and philosopher George Carlin, “The secret to life is NOT DYING!” The humor comes from pointing out the obvious. It should be a simple thing, yet to Anita Hannig, associate professor of anthropology at Brandeis University, it isn’t simple. Hannig is the author of The Day I Die: The Untold Story of Assisted Dying in America. The book explores how Americans who wish to die with dignity go about this task.

The Day I Die isn’t investigative journalism and shouldn’t be confused with it. As an anthropologist, Hannig collects information and testimony through fieldwork. While Margaret Mead and Claude Lévi-Strauss established careers by exploring tribal communities in exotic locales, Hannig performs the same function, albeit in the medical arena of the Pacific Northwest.

Unlike journalism’s idealization of neutrality and objectivity, Hannig’s fieldwork involves immersing herself within the medical field. She worked for several months as a hospice attendee and as a participant in several of her subject’s assisted deaths. Note, the title says “assisted death,” not “assisted suicide.” One of the pivotal factors in crafting legislation and setting up medical protocols is what to call this thing that happens to a person. Beyond the countless hurdles individuals face when desiring to die with dignity, language remains a stumbling block.

Hannig’s investigations and fieldwork lead her across the gamut of challenges faced by those seeking assisted death. Legal, medical, religious, political, and familial roadblocks can pop up along the way. She focuses on the Pacific Northwest, because that is one of the few places in the United States with legislation in place. Yet many hospitals refuse to assist or provide prescriptions because the hospitals are owned by the Catholic Church. (While outside the scope of Hannig’s project, there are questions about church-and-state separation issues on this topic, especially when Catholic ownership resembles a monopoly.)

While assisted dying might seem dour or depressing, Hannig fills the pages with humanity and humor of everyone involved. She also underscores how nuanced the concept is. “If we think of assisted dying not as an alternative but as a complement to hospice, it becomes clear that an assisted death affords dying patients something that a conventional death on hospice does not.” Throughout the various examples, she illustrates how assisted dying is more about alleviating pain and beating death to the punch. As part of the Oregon’s Death with Dignity Act, the applicant must be within six months of dying and not exhibit any symptoms of suicide or depression.

But Oregon’s law isn’t perfect. The law stipulates the individual must self-administer the lethal dose themselves. Meaning, they need the ability to swallow. Hannig profiles an applicant with ALS, a neurodegenerative disease slowly shutting down his motor functions. (Stephen Hawking had this disease.) If he can’t be accepted in time, he won’t be able to swallow and hence become ineligible to receive the lethal prescription.

Hannig also follow medical professions operating in a kind of bioethical gray zone, since they have had to learn how assisted dying works, even though the Hippocratic Oath forbids harming the patient. Yet the Oath presumes many things, not least the medical industry’s concomitant developments of life-extending technologies and the for-profit nature of the American medical bureaucracy. Extending the life of a patient hits the usual sentimental notes about life as sacred and such, but to those not bound by the Oath, the patient can be seen as an income-generating commodity. Why unplug the cash register?

Hannig’s fieldwork includes conversations with opponents of the Oregon law. The usual roll call of religious and conservative voices keen on the concept of “Life is sacred.” Although the phrase becomes empty, vacuous, and ideologically charged when faced with stories of people suffering pain. How does a medical professional “cause no harm” when keeping a patient alive means keeping them in perpetual agonizing pain? It is something where there’s no easy answer. Bioethics is complicated and should be an arena devoid of platitudes.

The Day I Die is an informative and accessible addition to the literature of death and dying. Hannig, as an anthropologist, explores the various roadblocks and challenges facing individuals who seek to die with dignity. Like abortion, it is a topic about bodily autonomy. Assisted dying is a complicated and controversial topic. Oregon’s Death with Dignity Act, while far from perfect, offers respite to those in chronic pain and those who dare to beat Death to the finish line. Hannig’s fieldwork has yielded a book with immersive prose and a thorough look at the legal, political, cultural, and linguistic challenges involved in the act of assisted dying in America.