Day of the Dead and Other Works 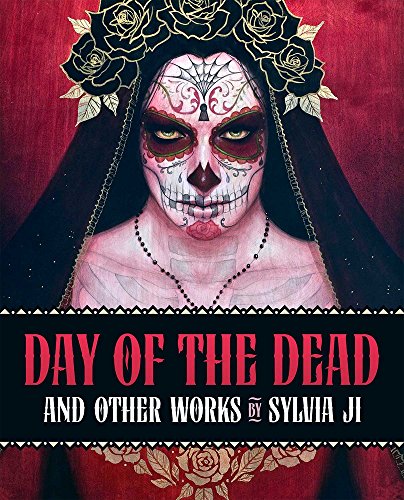 Sylvia Ji has created an artistic oeuvre melding elements of feminine lust and morbid death. Korero Press has assembled a retrospective collection with Day of the Dead and Other Works. Ji utilizes motifs from Victorian, Baroque, and Art Nouveau designs.

Her works began with the inclusion of deadly animals (coral snakes, poisonous tree frogs) with hauntingly beautiful women. Even from the beginning, her pieces evoke an eroticized death. Ji creates Liebestod with her beautiful women and her focus on death and decay. These early works exhibit the influence of artists like Alphonse Mucha, Gustav Klimt, and comic book illustration.

In 2007 came the introduction of Mexican artist José Guadalupe Posada’s character “La Calavera de la Catrina.” Literally translated as “Dapper Skeleton” or “Elegant Skull,” the traditional image is of a high-class woman with a skull face. With the Day of the Dead celebration, Mexican culture celebrates the departed with festivals, dancing, and sugar skulls. In the United States, death has been kept at arm’s length, more often than not in neutralizing euphemisms and uncomfortable silences—although this death-avoiding behavior has been abated in the works of Tim Burton, most notably Beetlejuice, The Nightmare Before Christmas, and Corpse Bride. Sylvia Ji co-exists in this artist milieu, living in Los Angeles, which until the Mexican-American in 1848 was part of Mexico.

As her artistic style develops the linework becomes smaller and more refined. Patterns overlay patterns, the woman’s skull make-up reflected in the detailing on the clothes and in background patterns. Yet the complexity does not overwhelm the painting’s composition. Everything is done in the service of highlighting the face of the woman.

Ji paints numerous variations of La Catrina, clothed and unclothed. The artistic nudes are disconcerting, the intertwined morbidity and eroticism triggers conflicted emotional responses. Even though the thematic content could be taken to extremes, the works shy away from sensationalism and gore. The paintings themselves are acrylic on wood, reminiscent of medieval artwork. Before canvas and oil became the popular mode of expression, painting on wood provided a cheap and durable medium.

Although the medium hearkens back to an earlier time, Ji’s work has been reproduced in numerous other media. These include: tattoos, skateboard, T-shirts, and more. It is debatable whether or not the proliferation of her images detracts from their original power. A true test of an artist’s viability is her work’s malleability in other media. The merchandising associated with Ji’s paintings will lend them a certain familiarity. Day of the Dead and Other Works presents an opportunity to associate those oft-reproduced images with a name.