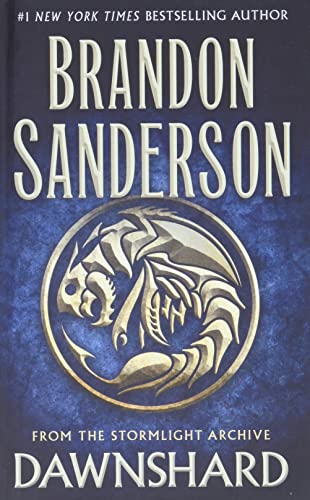 “All in all, Sanderson has given the reader another home run, a wildly inventive, fast-paced romp that proves, once again, he is the leader in modern fantasy.”

A ghost ship has been found, its crew missing after attempting to reach Akinah, an island surrounded by storms. An expedition must be mounted to assure that Akinah hasn’t fallen into enemy hands.

The characters include a paraplegic ship owner Rysn Ftori; the Lopen, a formerly one-armed once-king, who served a comic relief in the previous books; and Chiri-Chiri, Rysn’s pet larkin, a species once thought extinct. Chiri-Chiri, a stormlight eating winged quasi-insect, is ill, presumably dying, and Rysn believes that the cure for her pet can be found on the island that once housed the species, which, oddly enough, turns out to be Akinah.

Unlike how she is portrayed in the previous work, Sanderson has finally fleshed out the Rysn character to one for whom the reader can care. With a deft hand he has created a disabled character worth believing in as well as being relatable. Sanderson skirts a fine line between pathos and reality dealing with spirits broken in body and/or mind.

As for the Cosmere universe, the reader finally achieves a glimpse of the greater complexity of some niches in the world while at the same time Sanderson hints at more to come in future novels. This is a how-to manual in world building almost on par with the Godfather of Fantasy, J. R. R. Tolkien.

Set between Sanderson’s Oathbringer and Rhythm of War (the third and fourth book of the series), this short novel (or novella) is a more of exposition on his Cosmere world, although with real consequences to the major plot of the other works.

Because this story is an aside to the greater universe, the reader can’t help wonder how the events therein affect later works. Will it be a sort of stand-alone, or will Dawnshard dovetail nicely with the fifth book? One can only hope that these questions will be answered in due time. It seems to be an update sandwiched between two books, a little tie-in on characters that needed some fleshing out.

All in all, Sanderson has given the reader another home run, a wildly inventive, fast-paced romp that proves, once again, he is the leader in modern fantasy. Sanderson’s complex world building brings to mind the intricacies of Robert Jordan’s Wheel of Time series as well as his tongue-in-cheek humor.