Dawn of the Belle Epoque: The Paris of Monet, Zola, Bernhardt, Eiffel, Debussy, Clemenceau, and Their Friends 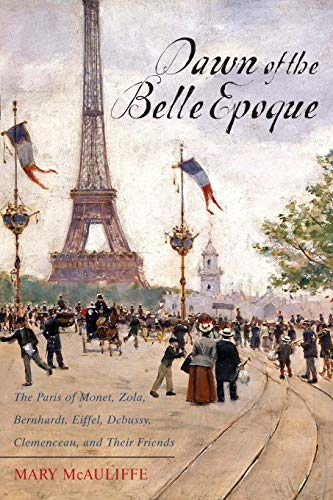 “Rich with the flavor of words . . . a marvelous and kaleidoscopic view of Paris . . .”

Gazing on Paris now from the vantage point of the Pont Neuf or the top of the Eiffel Tower or down the Champs Élysées, it’s nearly impossible to grasp the fact that in 1871 Paris lay smoldering.

The Franco-Prussian War left scores dead, buildings looking like burned-out skeletons, and citizens clamoring for food, driven to eating rat pâté and “horse in every form,” as Victor Hugo lamented. Fed up with the toadying of the conservative ruling class toward their Prussian occupiers, Parisian workers revolted against their rulers in a movement called the Commune. Over 20,000 Communards died in the hostilities that followed.

Parisians Victor Hugo and Sarah Bernhardt despaired that their city of light would ever shine again.

In Dawn of the Belle Epoque, Mary McAuliffe—who earned a Ph.D. from the University of Maryland and wrote for Paris Notes—tells the intriguing story of how Paris came alive again after that black period of French history.

Beginning with the Commune in 1871 and ending with the aftermath of the Dreyfus affair in 1900, Dawn of the Belle Epoque follows the tensions and conflicts of a society rebuilding itself. Ms. McAuliffe also presents the history prior to the opulent Belle Epoque period, that heady time leading up to World War I. Communards, Republicans, and strait-laced monarchist Catholic hierarchy, always at odds with each other—all vied for power and tested the loyalties of artists, architects, musicians, writers, and others.

Out of this seemingly endless ferment arose Impressionism, new ways of looking at sculpture, realistic literature, and symbol-filled music as seen in the work of Auguste Rodin, Claude Monet, Berthe Morisot, Claude Debussy, Erik Satie, Emile Zola, among others. In many ways, the period foretold a second French Revolution, a modernization of French culture. Tradition crumbled as much as the walls of the Tuileries Palace did in the face of the Communards’ fire and flame on May 24, 1871.

To tell this incredibly complicated story, Ms. McAuliffe uses an interesting technique, one that might be identified more with fiction than nonfiction. Arranged chronologically into 28 chapters year by year from 1871 to 1900, the book consists of short scene-like vignettes featuring key historical figures and their actions during the year in question. Thus Dawn of the Belle Epoque reads more like a novel than an academic history. Artists, writers, politicians, and musicians like Monet, Zola, Bernhardt, Eiffel, Debussy, and Clemenceau flit through the pages of the book in these short, almost fragmented, sections.

The monuments of the era—the Eiffel Tower, the Statue of Liberty, the Panama Canal, and the Basilica of the Sacred Heart (Basilique du Sacré Coeur)—also take on a life of their own through the stories of their creators and supporters: Gustave Eiffel, Paul Abadie, and Georges Clemenceau.

Ms. McAuliffe’s discussion of the Alfred Dreyfus case reveals the seeds of the sordid antiSemitism that surfaced later in France’s history.

Refreshingly, author McAuliffe attempts to paint all of the mythical figures of this period in a realistic way. The story of Berthe Morisot’s art and her marriage to Eugene Manet, Eduard’s brother, illustrates this tendency. Eugene wrote to Berthe while she was at the seaside in 1874, “I wandered through every street of Paris today, but nowhere did I catch a glimpse of the little shoe with a bow that I know so well.”

Another personality, Sarah Bernhardt, figures heavily in the narrative as well. Take female body weight as one example of how Ms. McAuliffe mines the lives of the key players in this drama to paint a portrait of the period. Bernhardt, according to contemporaries, possessed an abnormally skinny figure. According to Ms. McAuliffe, “Cartoonists portrayed her as a scrawny-legged chicken, or as one acquaintance put it, a ‘little stick with the sponge on top’—the latter being a reference to her mop of curly red hair, which tended to frizz.”

Rich with the flavor of words taken from primary sources, the book provides an intimate look at the very human side of history. An extensive bibliography including French sources and 24 pages of endnotes allow for much further reading investigation. Another book of interest is Roger Shattuck’s The Banquet Years: The Origins of the Avant Garde in France, 1885 to World War I: Alfred Jarry, Henri Rousseau, Erik Satie, Guillaume Apollonaire (1955). Ms. McAuliffe’s previous book, Paris Discovered: Explorations in the City of Light (2006), provides details about Paris as well.

Dawn of the Belle Epoque offers a marvelous and kaleidoscopic view of Paris as the city struggled to get back on her feet after the setbacks of the Franco-Prussian War and establishment of the Third Republic.

But a surprising omission lies in the lack of in-depth attention to the culinary changes that occurred during the period, primarily the roles of Auguste Escoffier and César Ritz in the growth of the hotels that became landmark destinations during the Belle Epoque. Ms. McAuliffe mentions anecdotal material, such as Escoffier’s creation of Pêches l’Aiglon for Sarah Bernhardt, but little else in regard to cuisine.

Except, of course, rat pâté and horsemeat, symbols of just how far France had come since the terrible years of 1870 and 1871. The idea of Eternal Paris is a myth. Today’s Paris rose from war and ashes, as Mary McAuliffe’s Dawn of the Belle Epoque so eloquently proves.