DaVinci’s Ghost: Genius, Obsession, and How Leonardo Created the World in His Own Image 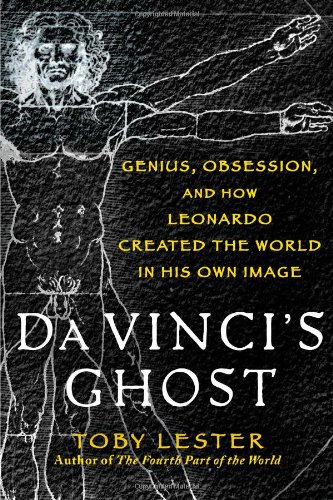 “. . . a readable and fascinating exploration of the mind of an artist who still manages, after four centuries, to surprise, inspire, and enlighten us.”

It is the Holy Grail of science and philosophy: the one formula, one precept, one theory that will explain everything. Leonardo DaVinci attempted just such a formula. In the familiar drawing that has come to be known as “Vitruvian Man.” We’ve all seen it in its many popular incarnations: a single image of a perfectly proportioned male figure within a circle and a square.

“When I mention it to people, they often react with a blank stare—until I describe the picture. Then, invariably, their eyes light up with the spark of recognition. ‘Wait,’ one person said to me, ‘the guy doing naked jumping jacks?’ Call it whatever you like, but you know the picture.”

Few, however, know the story behind the picture or what it meant to the Renaissance artist/architects who saw it as nothing less than the encapsulation of universal knowledge, the microcosm of the macrocosm, a theory of Everything, the Holy Grail.

The drawing is named after Vitruvius, a first century B.C.E. Roman artist/architect who codified the proportions of the human being as a standard of measurement. A contemporary of Augustus Caesar, Vitruvius made it possible for the Emperor to “Find Rome a city of wood and leave it a city of marble.”

Consider the maxim, “Man is the measure of all things.”

In the ancient world, an inch was the measure of a man’s finger from second knuckle to third, a foot was quite literally a foot and a cubit was the distance between the fingertips to the elbow. If there were no perfectly proportioned man, then there could be standard measures and marble structures would be impossible to design and build. You can fudge a little with wood, but not with stone.

Therefore, the need for Vetruvius to sculpt the standard human form by which all things could be measured was a crucial one. Copies of this statue were distributed throughout the empire and the result was massive architectural achievement everywhere the Empire touched.

Lester says of the Vitruvian principle, “Anatomy and Architecture, art and aesthetics, the circle and the square, medicine and geography, religion and philosophy, politics and the ideology of empire—they’re all there, rolled into one. Part divine and part human, the source of harmony and order, Vetruvian Man.”

Vetruvian Man came down to Renaissance Italy largely because of a shift in theology and philosophy in the 12th century. Plato was out; Aristotle was in. There was a new humanism extant that postulated the human being as microcosm.

Each individual man had everything in him that was necessary for an understanding of the universe and, dare we say it, an understanding of God. So there was a resurgent interest Vetruvius and his Ten Books on Architecture, as well as the perfection of Vitruvian Man.

The artist was no longer just a tradesman, but was beginning to be perceived and to think of himself as a “creator-god.” Certainly, Leonardo thought so.

Leonardo Da Vinci is known to be the epitome of the Renaissance Man. In Mr. Lester’s book, he emerges as a man as contradictory as he was ruthless in his pursuit of knowledge.

His restless mind caused him to leave projects, be they paintings or scientific experiments or architectural designs, unfinished as he pursued other subjects. Most of his paintings, even those for which he had already been paid, were never finished. As a result, he gained a reputation for fecklessness and was often dismissed as an uneducated tradesman, which was true, in a sense.

According to Mr. Lester, Leonardo had trouble with deadlines not because he was incompetent, but because he refused on principle to “simply churn out generic works as part of a factory collective.

What he wanted to do was to become, as he put it, “the universal master of representing every kind of form produced by nature.” But to achieve that he realized he would have to investigate “the makeup and function of everything.”

He was contemptuous of the teachings of the University, relying as they did on the works of the ancients while having little interest in learning by in personal observation.

Such an education led him, at least once, into a moral dilemma. A lifelong vegetarian because of his revulsion toward inflicting suffering on any living creature, he yet engaged in the live dissection of a frog, taking copious notes and thus inflicting prolonged suffering upon it, all to determine which organs were necessary for life and which were not.

On one side, we might applaud his ability to set aside personal beliefs in the quest for knowledge, and on the other we might be repulsed at the hypocrisy. Lester writes, “. . . in all likelihood, he endured considerable moral anguish while doing it. . . . He bought caged birds solely for the pleasure of setting them free, and, bizzarely for his time, adopted vegetarianism as a kind of personal philosophy.”

Great minds such as Leonardo’s must be capable of acknowledging their hypocrisies and continuing to live. Right and wrong are not absolutes with them.

Where small minds live in the comfort of a black and white worldview, great minds are comfortable in the areas of gray or to put it bluntly, moral relativism. To great minds, questions of right and wrong are answered with a definite, “it depends.”

Moral relativism, the search for observable knowledge rather than preexisting truth out in the cosmos, the paradigm of man as the measure of all things—all of the Aristotelian influences that helped define Renaissance thinking—found their culmination in Leonardo’s “Vetruvian Man.”

“One particular day more than five hundred years ago, I couldn’t help thinking, Leonardo set other business aside, laid this particular sheet of paper down on a table somewhere—and then after carefully dipping the nib of his pen into a pot of ink, began to draw Vitruvian Man . . . perhaps he drew it to make sense of an age old idea, to illustrate an ancient text or to sum up the essence of the human analogy . . . When he sat down to draw Vitruvian Man, in other words, the moment was ripe with potential. Already Leonardo had observed and studied the natural world more thoroughly than anybody before him, and now, by marrying his unique talents as a scientist and an artist, perhaps he felt he was on the verge of attaining what had eluded others for so long: the god-like ability to see and understand the nature of the world as a whole.”

One can almost smell the burning candle and hear the scratch of the pen and the slow, measured breathing of the young artist.

Leonardo didn’t get there alone. There were many artist/architects who preceded him and other who were his contemporaries. The 12th century mystic Hildegard of Bingen incorporated the principles of Vetruvian Man in her depictions of Christ

In DaVinci’s Ghost Toby Lester recreates the world of Renaissance Italy and places Leonardo securely within it. We are impressed with just how thoroughly the environments of the various cities he lived and worked in are described as are the people who supported and inspired him or those who despised and threatened him. (Once he was brought up on charges of having engaged in sodomy with a 17-year-old apprentice; he was acquitted.)

Leonardo is presented here more human than ever. Mr. Lester paints him as a charming, gregarious young man, delighting all around him and taking great delight in them, singing, dancing, cracking jokes at his and others’ expense, and ultimately exhibiting curiosity about everything he observed.

DaVinci’s Ghost is a readable and fascinating exploration of the mind of an artist who still manages, after four centuries, to surprise, inspire, and enlighten us.