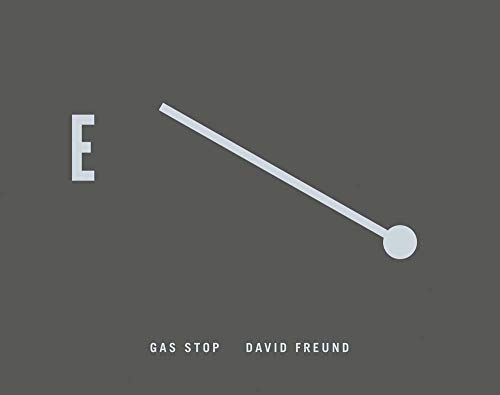 Parked next to a gas pump, a car has its hood up. Two men work on the car, a seventies-era machine. One man is older and more formally dressed. The younger man sports a ball cap, jeans, and a T-shirt. In the foreground a man in a flannel shirt readies to ride his motorcycle. The gas station itself is decorated with a Bicentennial paint job.

Beyond the gas station is a church. The caption reads, New York, 1979. Americana distilled to its essence. This single black and white photograph reveals both the program and technique for David Freund’s epic undertaking. David Fruend: Gas Stop by David Freund is a photo-essay documenting the gas station. Subtitled The Gas Station in American Life and Landscape, 1978–1981, Mr. Freund’s work presents his oeuvre without commentary or any political agenda.

Documented during the height of the oil embargo, Freund traveled across 40 states in four years. Today, these many years later, the photographs have now fallen victim to a nostalgic drift. But the inevitability of time and human emotions can do this to photographs, regardless of the photographer’s agenda.

Spread across four hardcover volumes, David Freund: Gas Stop has minimal captioning. The only text is four short essays at the end of each volume, no longer than one or two pages. The pictures tell the story. As Freund states in “Process,” the essay in Book 1: Midwest, “I chose not to impose on my unsystematic project a unifying theme, whether political, environmental, cultural, or architectural.” The end product is life captured at its most mundane.

Because of their omnipresence, it is sometimes a challenge to appreciate the profundity of gas stations. “Gas Stop’s stations amounted to a nation-sized fountain from which gasoline flowed to all on equal terms. In this democracy of fuel, all ages, genders, races and classes performed the tasks required by automobile travel and making stations thrive,” Freund says in “Gas Stations” (Book 2: West). He shows this throughout the four volumes. Black and white, rich and poor, urban and rural. All need gas for their cars or trucks.

Since this is a Steidl publication, expect the very best in production and execution. Each volume has a distinct color. The multicolored effect becomes accentuated by the battleship gray slipcover. Each volume has a fuel gauge on it, offset in white against each colored background. Over the course of the four volumes, the fuel gauge goes from F to E. A tongue in cheek visual commentary on the photographs within.

The photographs themselves are clear, not necessarily crisp. Expect clarity, but not 4K digital clarity. It would be an exaggeration and misrepresentation to describe the photographs as blurry. Unlike digital photographs, these images approach the realm of photojournalism or candid snapshots.

Capturing a moment in time, Freund illuminated the particular. While the oil embargo looms in the background, it also manifests itself in unassuming instances. Captions provide the year, but it can also be guessed observing the gas prices. In other cases, a gas station has gone out of business. Then it looks like a modern counterpart to a ghost town once the Gold Rush dissipated. Fashions remains pretty much the same throughout. Another more subtle transformation is the transition from owner-operator businesses to corporate franchise. Once noticed it can’t be unseen.

David Fruend: Gas Stop represents a monumental achievement in photojournalism. A grand scope sharpened through a short time span creates a diverse group portrait of the United States. Egalitarian in its clientele and omnipresent in location, the gas station has become a meeting place for all. David Freund captured the everyday in action. The photographs are candid and off-the-cuff, preserving moments otherwise forgotten in the flow of the quotidian.