David Bowie (Lives of the Musicians) 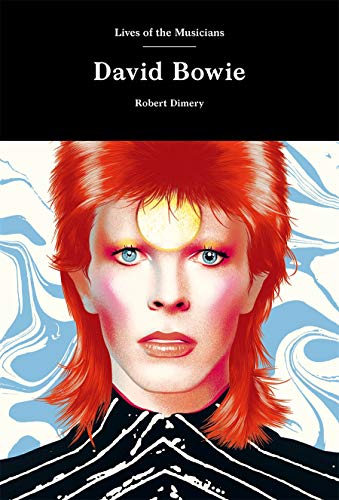 This is not the first biography of David Bowie. There are already at least half a dozen books and hundreds of articles about the rock star who began to make records near the tail end of the 1960s, and who went on making records until shortly before his death on January 10, 2016 in New York, an ocean and light years away culturally speaking from his birth in London, England in 1947.

Dimery’s biography, which belongs to the "Lives of the Musicians" series, will not be the last about Bowie. At 152 pages, with a discography, a bibliography and an extensive index, Bowie skims over the surface quickly, with an occasional pause to look deeply at the life of an “elusive and mercurial” fellow.

Still, Dimery knows how to compress information and make it entertaining. The author of 1001 Albums You Must Hear Before You Die, Rock 'n' Roll Heaven, and Rock History, he can rock and roll when he wants to.

Unfortunately, Dimery’s book—which is almost small enough to fit into a back pocket—is largely about Bowie’s performances, albums, friends in the music business, marriages, wives, divorces, hair styles, staging, theatricality, androgyny, and his roles as an compelling actor in a series of movies, including The Man Who Fell to Earth (1976).

Part of the trouble with Bowie is that, given copyright laws, there are almost no Bowie lyrics in the pages of this book, and little discussion of his language, his imagery, and his voice.

Bowie is not alone in this regard. Unless they are well-funded, biographies of rock stars rarely have quotations from the lyrics by the artists themselves.

The only sensible thing to do is to move from the biographies to the albums; away from reading toward listening. That goes for this biography.

Bowie begins with a bang: “During the seventies, David Bowie rewrote pop with a bravado and inventiveness that recalled the Beatles at their zenith.”

In the chapters that follow the first, which is titled “Becoming Bowie,” there are some highpoints, including Bowie’s fascination with Fascism, and later his time in Berlin, where, according to Dimery, he mixed with people whose fathers had been Nazis. Accordingly, Bowie lost his fascination with dictators and with Hitler.

In Berlin, Bowie cut a five-track EP of Brecht’s songs which Dimery calls it “an artistic triumph.” Now that would be worth hearing.

Before long this biography loses steam, the author’s enthusiasm dries up and the story goes downhill fast. According to Dimery, Bowie became “a conventional star” who, while “unpredictable and unique,” lost his way.

Did success spoil David Bowie? It would seem so, but this book might have been more appealing if the author had traced step-by-step the decline and fall of a superstar, who for a time embodied the dreams and the fantasies of at least one generation and maybe more.

Fans of contemporary music may not know the name, David Bowie, but they will probably perk up at the mention of some of the roles he created for himself and for the ages, including “Ziggy Stardust,” “Major Tom,” and “the Man Who Fell to Earth.”

Despite its limitations, Bowie is a useful introduction to the man who was born David Robert Jones, and who had no interest whatsoever in keeping up with any Joneses, but who wanted to transcend time and space.

Dimery suggests that he did that, indeed, at least for a flickering moment.