The Daughter's Tale: A Novel 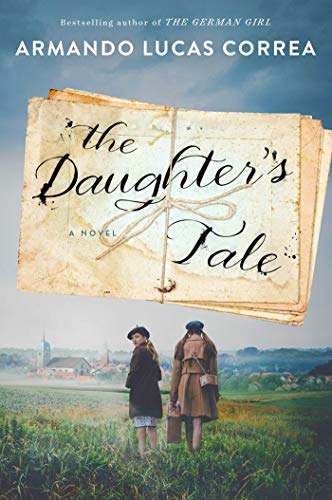 “The Daughter’s Tale is a brilliant, engrossing, immersive novel with extremely compelling characters. Correa extrapolates from the powerful connection between mother and daughter during a crisis of unimaginable proportions.”

It’s 1939. The head of a close-knit German family, Dr. Julius Sternberg, is a beloved physician with a large practice. Many of his patients care deeply about him. His wife, Amanda, takes care of their two young daughters, Viera and Lina. They own a delightful bookstore and live upstairs.

This idyllic lifestyle comes to a crashing halt when Nazis arrest the good physician because he is a Jew. German soldiers burn his office and the charming bookstore, including the family living quarters. Julius is sent to a Nazi concentration camp, where he is murdered because of his faith. Before being put to death, his last act of courage is to arrange, with a trusted patient, for the escape of his cherished family on the German passenger ship, the SS St. Louis, bound for Cuba.

This spellbinding account takes place during a time of great tragedy for Jews. Jews are subject to arrest, including children, and sent to forced labor concentration camps. Soon after, everywhere in Europe, Nazis begin the lengthy process of exterminating Jews.

Devoted wife and mother Amanda Sternberg is pushed into the most powerful and dreadful decision of her life. To save one daughter, she must give up the other. She decides to give up her older daughter, Viera.

Correa’s mesmerizing tale takes us to a small town in occupied France before disappearing into the cloud of death produced by Nazi Germany. Here, during a time of dreadful tragedy, courageous individuals rise to help those in need, while others secretly help Nazis.

Amanda and her younger daughter, Lina, flee to occupied France, near Limoges, where the widow of an old family friend takes them in. She sends letter after letter to Viera in Cuba. But she never hears from Viera.

For many months, hidden in a small home, Amanda and Lina live comfortably with their friend, Claire, and her daughter Danielle, who is near Lina’s age. They pretend to be Christians, attend weekly religious services, and are befriended by a very brave priest who will do everything in his power to shield them from Nazis. Lina and Danielle are like sisters, caring deeply for each other and their “mothers.” Amanda never stops sending letters from the pages of a special book to Viera.

In this Nazi concentration camp, Amanda befriends a French guard and hatches a plan to send Lina to safety, along with Claire and the priest. But Amanda is required to pay a price for this cooperation, and the French soldier is unrelenting. Forced to betray everything good that Amanda has learned in life, nothing will prevent her from saving her precious Lina. This new guilt, culpability, and shame is piled upon the guilt incurred from losing Viera.

The Daughter’s Tale is a brilliant, engrossing, immersive novel with extremely compelling characters. Correa extrapolates from the powerful connection between mother and daughter during a crisis of unimaginable proportions. Here, the love and bonds of family are rendered with perfect alacrity. Amanda must face terrifying conditions and do everything in her power to save her daughters from near-certain death.

This book presents painful true events about a Jewish family destined to be exterminated. Within the most painful trials of history, this is a story of heartbreak and death. It is also tale of compassion, immense love of family, of responsibility, endurance, and redemption.

The author takes readers on a guided tour of relentless genocide. After members of a small French town murder a terrible Nazi officer, revenge is visited upon the entire town. Virtually all innocent people in this French town are murdered because they despised evil. Here, among the few survivors, our protagonists survive against great odds. It is here, in our darkest moments, that our human spirit shines the brightest.

Psychiatrists say that the most powerful human emotion is guilt. The extent, power and influence of guilt is deftly employed by Armando Lucas Correa. He applies guilt to his primary protagonist, Amanda, and to her daughter Lina. This riveting tale begins and ends with Elisa. But it is about the courage of a mother to save at least one of her children.