Daughters of the Resistance 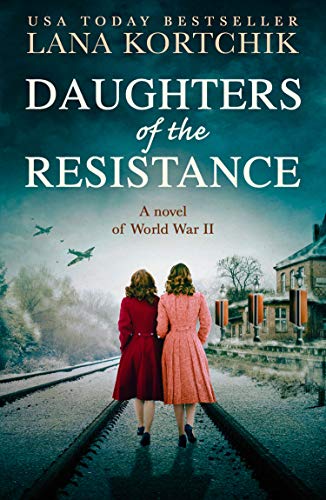 Lana Kortchik tells the fictional story taken from facts about World War II and how it impacted the city of Kiev in Ukraine. In January 1943, Lisa, a young woman estranged from her family, is hustled onto a train boxcar with many from her town after being burned and destroyed by the Nazis. Informed they are being shipped to Germany to work the factories, they are crammed like cattle into the car with no food, water, heat, or sanitary facilities. The scent of urine, feces, sweat, and most of all, fear, prevails.

After three hours on her feet, hunger and cold draining her, all Lisa wants is to sit. She bumps into a woman named Masha, a few years her senior, who moves slightly aside and offers Lisa a crust of bread. Thinking she has found a friend, Lisa's spirits heighten somewhat until they hear gunshots. The boxcar door is crashed open, and the captives witness many dead German soldiers lying in the snow. Two partisans have come to rescue them, and two trucks await to take them back to Kiev.

The truck departs, leaving Lisa and Masha alone with the two partisans who liberated them. They hoist them on horses and bring them to where they have set up camp to get food and rest. Lisa, having no family, pleads to remain there to assist in any way she can. She has no skills but is assigned to toil under Yulya, a cranky older woman in charge of the kitchen.

Masha is greatly accepted as a trained nurse, for there is no help for the wounded. Married to a partisan, she decides to stay at the camp, hoping her husband will be transferred there.

The two women settle into huts with beds of straw, dirt, no heat, and few provisions. They are always cold but find their purpose in their work, where Masha proves to be a tremendous help to the soldiers. Lisa slaves away under the tutelage of Yulya, finding some relief from the freezing temperatures in the overheated kitchen, even though Yulya is a cruel and demanding taskmaster.

Lisa finds the one source of pleasure is her attraction to Maxim, the soldier who rescued her from the train. As time progresses, her feelings grow, and when he teaches her how to shoot, she is repulsed by the thought of killing another, though she only wants to be close to him.

Meanwhile, the next voice in this tale is Irina, Maxim's wife and the mother of a toddler, Sonya, who resides with his parents in Kiev. She misses him terribly, and they too have barely enough food for the four of them. Zina, her mother-in-law, is judgmental and cruel to Irina, making matters worse. They all keep a low profile, sworn to secrecy, so the Nazis do not capture her, Irina works at a job she hates registering those dead Kiev residents, keeping Maxim's whereabouts unknown for the family's safety. She discovers she is newly pregnant with her second child and worries about explaining this to her in-laws when money and provisions are scarce.

"'Some people would sell their own grandmother if it meant they could have a better life. They go out of their way to suck up to the Nazis’ . . .

. . . "'The Ukrainian policemen are often worse than the Germans. At the start of the war, a Nazi officer came to our house with a Ukrainian interpreter. They were looking for radio receivers and weapons. When I saw the Ukrainian pig with his self-satisfied greasy face, I couldn't help myself. I told him exactly what I thought of him. I called him a traitor said he should be ashamed of himself turning his back on his own country like this.'. . .

. . . "'He was furious. Slapped me hard across the face and would have hit me again if the German officer didn't stop him. He shouted at him for hitting a woman. I couldn't believe my ears. When the Ukrainian pig told him what I'd said to him, the officer laughed so hard, I thought his pants would split. And then he said, 'But the young lady is right. You are a traitor. Why are you punishing her for telling the truth?'"

This seemingly endless conflict continues, and the devastation of lives and property is relentless. The stories from the two protagonists filled with unspeakable pain and heartache demonstrate just how horrid war is. The fear of the people and the desolation of the situation is emotionally painful, yet this is a case of the atrocities that happened in our history.