Daughters of the Occupation: A Novel of WWII 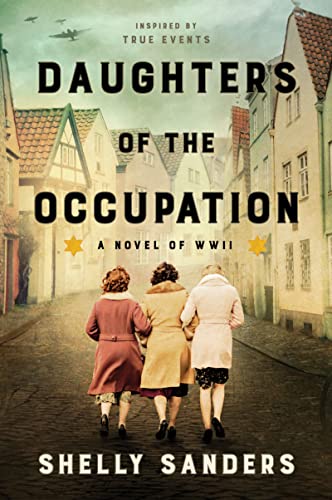 This highly emotional novel includes two narratives combined in one, commencing in June 1940 in Riga, Latvia. Miriam Talan, a young Jewish woman married to Max, a dentist, and the mother of Ilana, is happy with her life. Not rich, but neither poor, Miriam's life quickly changes after giving birth to her son Monya. Their country is invaded by the Russians, destroying property and murdering innocent people. They are targeted for being Jewish; when Max's business is confiscated, he suggests they flee from their home, but Miriam's parents state the borders are closed, and with no assets to leave, they have no choice but to stay put and hope this senseless war will end soon.

In April of the following year, three members of the Soviet government arrive at the Talan home. They inform Miriam she can pack only these meager belongings: one bed, two sheets, two plates and spoons, three pairs of shoes, two coats, two hats, only books related to their work, and her wedding ring. Then they relocate the family to a damp and decrepit flat which is to be their new residence. All their assets are seized, and they are left to live in squalor.

Before long, the Nazis and the Russians band together and then sequester the Jews leading them to slaughter. Max is murdered in front of Miriam, elevating her fears for her family. She knows they should run, but where can they go with no money and a target on their heads just because of their religion? Thankfully, Miriam's long-time Christian housekeeper, Gutte, agrees to take Ilana and Monya and raise them as hers until the war is over. Miriam is devastated by her beloved husband's death, and it breaks her heart more to part with her children, yet she realizes this is the only way to keep them safe and alive.

We segue to November 1975, when Sarah Byrne is attending her mother's funeral. Distraught over her loss, Sarah is shocked when confronted by a woman with haunting green eyes and an uncanny resemblance to her mother:

"Her grandmother's remarkable likeness to her mother made the hairs on the back of Sarah's neck bristle. Sarah stared at Miriam, flustered. Afraid to look away for fear she'd vanish. Everything around them receded to a dull hum. Sarah hadn't seen Miriam in years because Miriam and her mother had been estranged, though Sarah had no idea why. Her mother would change the subject every time Miriam's name was mentioned, even when Sarah pushed hard, reminding her Miriam was her only living grandparent. You don't need that woman in your life, her mother had responded in a barbed voice leaving no room for argument."

Sarah tries to establish contact with her grandmother by taking her hand, but Miriam wrenches free, stating this is not what her daughter wanted, then quickly leaves. This action makes Sarah more determined to know Miriam, needing to learn what happened between her and her mother. But Miriam, an irascible older woman, wants no part of Sarah, or so she says. But Sarah will not be deterred in her efforts. Her only family is her father, Paul, and now Miriam. Met with indifference, she goes to Miriam's apartment, and he soon notices her warming up as her visits become more frequent. However, she refuses to discuss Sarah's mother and their past.

Little by little, Miriam tells her story in separate chapters, revealing the horrors she and her family faced during the war. It is reprehensible what the Jewish citizens of Latvia endured and the cruelty forced on them. Once living a reasonably prosperous life, they were sent to Siberia, starved, stripped of their belongings, and murdered. Yet somehow Miriam managed to endure. Considered dead and thrown in a pit with others who are slaughtered, Miriam lies among the deceased until the enemy leaves, and she manages to crawl out and flee. For the next three years, she lives hand to foot, hiding in barns, foraging for food, and with the kindness of a few. Her primary goal is to return to her children.

Miriam becomes ill and is hospitalized, where she reveals some of her past to Sarah, telling her about Monya, the uncle Sarah never knew she had. Latvia, still under Soviet rule in 1976, does not detain Sarah from going there to find her uncle to offer a semblance of peace to Miriam before she passes. Even though 30-plus years have passed, Sarah is subject to intense investigation, but with the help of Roger, a Russian-speaking professor she met on her flight, he assists her in her pursuit

Daughters of the Occupation contains fictionalized scenarios of actual events during WWII. A highly emotional tale, charged with heartbreak and suffering, yet awash with perseverance, persistence, and a strong will to survive, this is a read that will stay in the minds of those who are lucky enough to read it.