Daughters of the Nile (Novel of Cleopatra's Daughter) 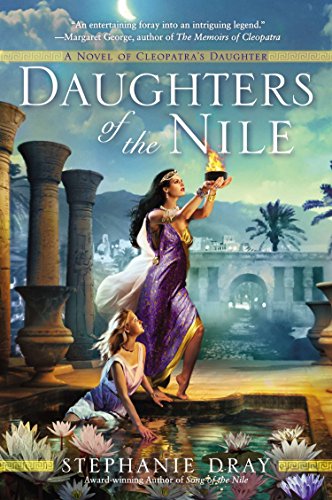 The title Daughters of the Nile makes it sound like this book is set in Egypt, but one of the many pleasures of Dray’s novel about Selene, the daughter of the famous Cleopatra, is that its primary setting is Mauretania in Northern Africa, a part of the world authors rarely portray whether in historical or contemporary fiction.

Dray has indeed also painted a vivid portrait of Rome and Herod’s dysfunctional kingdom of Judea and a variety of other parts of the Roman Empire, both far flung and central during the rule of Augustus.

Dray’s command of this period is impressive. Her details of upper class homes in Rome and places like the temple of Vesta ring entirely right—for many readers these are places we’ve been taken before—but what seems more impressive is the way she lets her readers discover entirely new environments as she brings the Mauretanian court and the African landscape to life.

The court is a cosmopolitan mix of Berbers, Alexandrians, Romans, Greeks and Macedonians. The lavender-scented gardens, “fragrant citrus wood” tables, ivory thrones inlaid with mother of pearl, the billowing curtains shading the royal rooms of this heat-soaked land, the henna patterns drawn on women’s bodies, a stallion’s stall door “ornamented with golden lions with emerald eyes”—Dray has attended lovingly to the details of this splendid palace.

The natural setting gets a similar treatment: “a forest of cork oak trees so old that they saw the Carthaginians rise and fall,” rocky caves that fill with “hissing sea spray,” fertile fields of wheat that feed the city of Rome and keep the kingdom of Mauretania semi-independent, and a sirocco windstorm driving red dust in its wake and bringing Selene a magical strength that quite believably arises from this lustrous landscape.

This is the third book in a series (Lily of the Nile, Song of the Nile) although it is an enjoyable read as a stand-alone. Selene has gone from being a captive of the Emperor Augustus to Queen of Mauretania and wife of King Juba II; however, Augustus has not given up control over her.

Selene, at the beginning of the novel, would say she is seeking independence from Augustus for herself and her kingdom, but interestingly she achieves a somewhat different goal by the end, a humane and philosophically appealing response to her life’s path.

Dray has honed a subtle and entirely believable arc for her main character and for Juba. Daughters of the Nile is as much about the nature of marriage and forgiveness and happiness as it is about Roman political machinations and internecine plots.

Part of what has made this thematic treatment work arises from Dray’s interpretation of Augustus. When the author turned to the historical, archaeological and numismatic evidence extant about Selene, she found some tantalizing inconsistencies and many giant gaps. The historical novelist has to somehow reconcile the contradictions while repairing the missing pieces. It takes a combination of common sense and imagination.

One of the problems she had to resolve is why Augustus never viewed Selene and her kingdom as a threat to be curtailed and rendered powerless. As Dray says in her author note, “Selene’s coins are so brazen, so nearly belligerent, that one would expect her to have paid some political price for them.” And her coins are not the only liberties she took.

So why does Augustus tolerate so much from this daughter of an exotic queen with ancient dynastic claims? We know Augustus was anything but faithful to his wife. Suetonius takes swipes at him as a despoiler of virgins. So what better to drive a plot than an entirely unhealthy obsession with this young and beautiful woman who first arrives to him in the chains of a captive? And Augustus has some challenges, you could say, letting go even after he’s married her off to King Juba, his dear friend.

This is not the Augustus that most history books would tell you about, but certainly we’ve grown to understand that men who lust after power and influence often like to exert it in pretty unsavory ways over young women.

But, Dray suggests, in Selene it is possible Augustus met his match, all the more so because she did not choose to reach for everything, as he had done. Moderation, even hard won and only late in the game, may be the most potent source of power and here it lies in the hands of a woman.

This is a page-turner with every bit of entertainment you could ask, but it also has some profound things to say about politics, greed, relationships, family and love. Dray’s not insisting on this read of Augustus as definitive in the scholarly sense, but readers will find it both enjoyable and, at least in the context of this lushly built world, persuasive.

Dray has intermixed her history with some magical realism. Selene is a devotee of Isis and receives from the goddess some extraordinary powers. Some readers of a historically purist bent may be tempted to be put off by these forays into fantasy.

Yet in the Egyptian milieu of Selene’s childhood and elsewhere in the eastern parts of the Roman world of this period, rulers were given divine status and it is not a far step for these same rulers to believe in the divinity and powers attributed to them.

There are skeptics within the book who sometimes provide the naturalistic explanations, but don’t be surprised if you find yourself drawn up willingly into mystical storms, fiery attacks and the land’s fertility arising with a resurrected god from a river. All these beliefs are entirely appropriate for this time and place and add an engaging dimension to the tale. One of the virtues of this book is that you begin to understand why people believed in these things.

Dray has worked her tale on a massive canvass: the entire Roman Empire. Yet her vivid creation of each setting keeps us grounded and intimate. She has a large palette of characters, but each is developed deeply enough to hold our intense concern.

This intimacy amidst the giants is aided by a single, distinctive, close narrative point of view with Selene. We are with her at each step. Keeping straight all these places, characters, and plot lines could have left the reader’s head spinning, but Dray pulls off this feat without appearing to break a sweat.