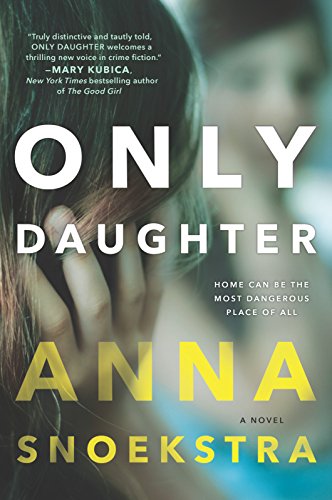 “Trapped between truth and lies and an overwhelming sense of further tragedy if she speaks out . . .”

What unfolds from that statement forms the basis of Only Daughter.

The unnamed narrator is aware of Rebecca’s story. She’s seen the photographs on television, heard the documentaries broadcast every few years on the anniversary of the disappearance. She’s aware she’s nearly Rebecca’s twin. When faced with a shoplifting charge, she decides to use the information to escape arrest.

What she doesn’t bargain for is being returned to Rebecca’s mourning parents, where she’s expected to settle again into the family. Becoming acquainted with Rebecca’s brothers and best friend, and the further complication of falling in love with the best friend’s brother doesn’t help . . . nor does the reappearance of the policeman who led the original investigation, now snapping up clues like a tenacious bloodhound.

Pretending amnesia of the events before her arrest, she believes she can live an extended bluff. She refuses to speak to Senior Inspector Andopolis, expecting him to tire of her rebuffs and let down his guard so she can escape.

Andopolis is determined to find out where “Rebecca” has been all these years and bring her abductor to justice. The girl soon has other things to worry about, however. The vibes she’s getting from the family aren’t exactly those of a close relative rejoicing in a loved one’s return. Sinister overtones tinge everything they say. She can’t explain the twinges of revulsion she gets while in the mother’s company nor can she find a reason why the woman never leaves the house. The father’s preoccupied air hints at some unspoken problem . . . and there’s the nagging belief there’s something the twins know that could jeopardize her deception.

Trapped between truth and lies and an overwhelming sense of further tragedy if she speaks out, the make-believe Rebecca begins to form a picture of her namesake’s life and exactly what caused her disappearance.

Told with narratives of the false Rebecca’s experiences alternating with the actual events of that long-ago day, the story correlates what really happened to Rebecca with what’s going on in the present with her lookalike.

The horror in the story is slow-growing. First a word here, then an incident there, and many unanswered questions . . . what is the mysterious presence Rebecca senses in her room at night . . . what happened to the so-called “crazy” neighbor . . . what really went on at the supposed “exorcism” Rebecca performed in the family garage, and why did she refuse to enter it afterward?

Though the switch in tenses is a bit disconcerting—first person present for the contemporary narration and third person omniscient for Rebecca’s portion of the story—the juxtaposition of viewpoints brings past and present events into a frightening collision until the final moment when the imposter realizes exactly what happened to Rebecca Winter, the tragedy she’s going to cause by revealing it, and what she herself will lose if she speaks out. The reader will find himself or herself in the ambivalent position of hoping for Rebecca Number Two to have a “happily ever after” with Jack while wanting the criminals brought to justice.

Calling a novel a “page-turner” has become a cliché. Nevertheless, Only Daughter is exactly that. Once the book is opened, it will be difficult to put it down until Rebecca’s secret and her doppleganger’s discovery are revealed. After it’s closed, those last moments of revelation will linger uneasily in the imagination for quite some time.