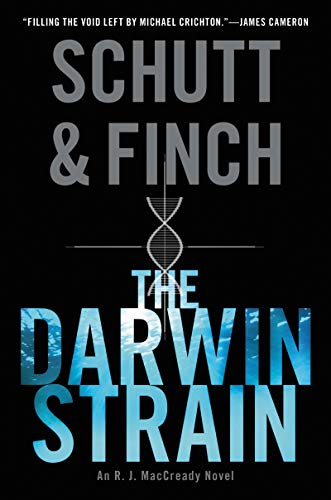 “because of its confirmation of so many startling facts, merely reading the Afterword may make one think twice before again dipping a toe into the ocean.”

In the waters off the Greek Isle of Santorini in the year 1948, a miracle occurs. The seas turn red. Anyone touched by the water or eating the fish in it are healed of their illnesses.

The red water is trickling through vents in the ocean floor.

“Some were calling the red plume stigmata, though no one, save for the Frenchmen dared investigate deeper.”

Former French naval officer Jacques Yves Cousteau is part of the newly formed Underwater Studies and Research Group sent to investigate, along with his friend Pierre Boule; American R. J. MacReady; and Yanni, a Brazilian with the unusual ability to communicate with animals.

MacCready and Yanni are already aware of what the red water can do, having gotten a sample of its power while in Tibet. They call the hydrothermal microbe the Darwin Strain.

When two diving companions are suddenly enveloped in a transparent death-dealing curtain, Cousteau will quickly realize this assignment is more than mere scientific investigation.

“They seemed to come apart—to peel open before Cousteau’s eyes—leaving behind ribbons of curled flesh and a new hue of red clouding the water.”

The survivors give their attacker a name—Kraken—after the Norse legend, but this creature is more than legend, for it not only has the ability to become near-invisible, but it also possesses the intelligence to anticipate and form battle plans—and to communicate.

Within a short time, Cousteau and the others will be fighting for their lives against a foe a great deal more intelligent than they.

Things get even more complicated when an aquaplane brings Nora Nesbitt, a former colleague but now an adversary, to the island. A short time later, several of the crew are killed much as Cousteau’s divers were.

When Russian spies and submarines appear, and the attacks continue; the disparate groups must decide if it’s best to keep fighting the Cold War or make a truce and hope banding together helps them survive.

“The arrival of the Russians was anticipated. Like a chess game, the path always zigged and zagged several steps ahead. Mac allowed himself no more than two minutes for the adrenalin to dissipate, then decided, If the road ahead divides in dangerous woods, get off the path and make a new road.”

While some readers may begin this novel with the belief it’s a standalone, it will soon become apparent it’s part of a series, as the constant references to things happening before the beginning of the story indicate. Because of that, there’s no actual “introduction” of characters, though some background is given, and things may be confusing unless the previous story has been read.

Starting out in what may be considered the “typical” horror story style—a phenomenon discovered that may or may not be harmful, those in the know having secret information about it—the story changes from the usual horror novel to more of a Cold War spy thriller when Nesbitt, whom one may consider a traitor, appears, and Russian ships sail into the harbor.

There is also a plethora of actual personalities, from Jacques Cousteau to Bobby Kennedy to lesser known but no less authentic ones, each contributing to the story in his own way. Cousteau is a central character in this novel, and is the first introduced as he arrives at Santorini.

There is a great deal of time-jumping in the story—events happening to the crew before they arrived on Santorini, interspersed with scenes from 533 million years BCE and the first encounter of hominids with the sea creatures; passing into Greek and Roman times and other eras. This may lead to some confusion to the reader in the coherency of the narration.

Nevertheless, this is an exciting, somewhat chilling story, more from the fact that some portions are stated to be based on actual fact. In a somewhat lengthy (35 pages) Authors’ Afterword, Schutt and Finch go into significant detail concerning the history of the Kraken, the real-life behavior and intelligence of cephalopods, President Truman’s part in the bombing of Hiroshima, and the legend of Odysseus, among other events.

It is scientific enough to bring a chill but not so much that it will dampen the reader’s interest.

However, because of its confirmation of so many startling facts, merely reading the Afterword may make one think twice before again dipping a toe into the ocean.

Since this is a series, the ending isn’t so much a finish as a momentary cease fire between man and creature.

As the last line says, “the Kraken isn’t through with our kind, yet.”