Darwin Devolves: The New Science About DNA That Challenges Evolution 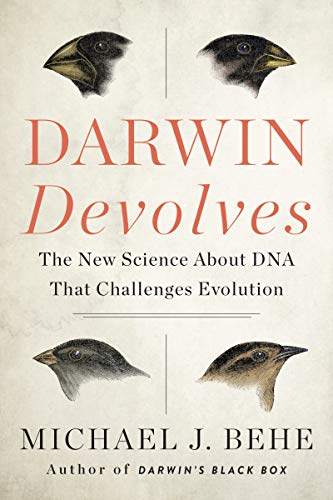 “The open-minded reader will definitely find Darwin Devolves to be an enlightening and informative look at a very controversial issue.”

What if Darwin knew about DNA? What if this 19th century scientist knew about the amazingly complex processes that govern reproduction and development in all living species? An interesting question, the answer to which we will never know. Darwin developed his theory of evolution based on physical observations, not on genetic analysis and molecular studies. His best-known work is The Origin of Species (interestingly, the full title is The Origin of Species by Means of Natural Selection or The Preservation of Favored Races in the Struggle for Life). In his day, the definition of “species” was thought to be fairly clear. Today there is ongoing debate as to exactly what a species is (see Science News, November 11, 2017, for one such discussion).

Michael J. Behe is an American biochemist, author, and advocate of the principle of intelligent design. He serves as professor of biochemistry at Lehigh University in Pennsylvania and as a senior fellow of the Discovery Institute's Center for Science and Culture. Behe has published two previous books on intelligent design. In addition, he has coauthored several papers on topics such as DNA structure and protein chemistry in major scientific journals such as Biopolymers, Biochemistry, and Proceedings of the National Academy of Sciences.

In the introduction to Darwin Devolves, Behe traces his own journey from accepting the standard view of evolutionary theory to growing doubts about the Darwinian explanations in light of the explosion of information about the structure and functions of the cell. The exquisite and detailed organization of cell components and their ability to function together to carry out life functions render any mechanistic, “unintelligent, undirected process” impossible. His questions (and the unsatisfactory answers he received) led to an intensive exploration of the scientific literature and the writing of two previous books developing the ideas of intelligent design.

The challenge to the Darwinian paradigm is laid down early in the introduction: “all particular positions on the topic can be considered to be elaborations on either of just two general mutually exclusive views: (1) contemporary nature, including people, is an accident; and (2) contemporary nature, especially people, is largely intended—the product of a preexisting reasoning mind.”

Critiques of the Darwinian theory of evolution have grown, especially over the last few decades as our knowledge of the molecular intricacies of the cell and the organism have increased. Behe covers in some detail the development of the Darwinian ideas and their modern modifications. He provides an analysis of evolutionary thinking that is enhanced by modern DNA findings. Also provided are cogent arguments that question these conclusions.

Instead of mutations developing new genes (and, therefore, new forms of life), the argument is made that beneficial mutations often produce damage to the DNA, leading to a loss of genetic material. Behe provides a number of examples to make his point.

More troubling to those who hold to the idea of naturalism (the idea that only natural causes can be considered and the supernatural or spiritual is excluded) is the advocacy that intelligent design requires the idea of mind and consciousness. There has been a great deal written about the mind and how it might function (for example, see “Is the Universe a Conscious Mind?” Aeon, February 8, 2018).

To many in the life sciences, intelligent design is often equated with creationism (based on a literal interpretation of the book of Genesis). However, intelligent design only proposes an intelligent mind and makes no attempt to identify the specifics of that mind, thus making the theory acceptable to Christians, Jews, Muslims, other religions, and even a few atheists. Behe explores the history and philosophy of the concept of mind in the latter chapters of his book and concludes “life is the product of a mind.”

The notes section at the end of the book demonstrates Behe’s grasp of relevant literature, both scientific and philosophical. These references cover a wide span of topics, delving into the complex studies of protein structure and the basic issue of consciousness and purpose. Since life is so much more than a series of enzyme reactions, the question of “why does it happen?” has to be raised. Sterile mechanistic studies do not provide an answer.

Behe spends time in the Appendix to consider the thoroughly discussed issues of how the bacterial flagellum did or did not evolve and the controversy over the irreducible complexity of the blood-clotting system. The explanations of evolutionary scientists are seriously considered, and the flaws in their research findings are pointed out. At the end of the Appendix, Behe makes this statement: “The utters sterility of Darwinian theory in accounting for complex functional systems (as shown by these and many other examples) should push evolutionary theorists to consider that they just may have been barking up the wrong tree.”

Darwin Devolves is definitely not a light read, requiring a more than rudimentary knowledge of various aspects of biology as well as a decent grounding in philosophy and current thoughts about mind and consciousness. By rights, the book should have a scientific publisher, except for the fact that the scientific community has banded together to boycott any discussion of intelligent design (see the Notes section of the book for examples). The open-minded reader will definitely find Darwin Devolves to be an enlightening and informative look at a very controversial issue.