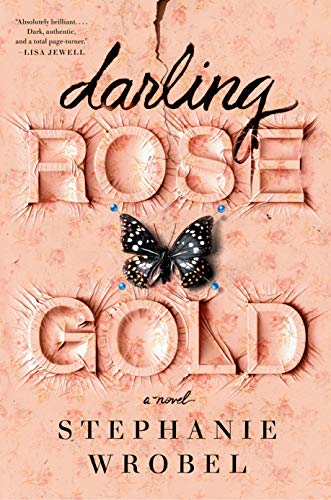 “This debut novel is sure to raise one's hackles.”

Single mom Patty Watts has been raising Rose Gold by herself since the child's birth. Patty, who suffered a horrendous upbringing of abuse from her father and a mother who did nothing, determined she would give Rose Gold all the love she never got and then some.

For the first 15 years of her life, Rose Gold is constantly ill, and Patty carts her around from one doctor to another, but a definite diagnosis is unattainable as to why she is so thin, sickly, and can barely walk. She can't hold down any food and isn't growing or flourishing.

When Rose Gold's next-door neighbor and friend, Alex Stone, turns Patty into the authorities she states Patty is the cause of Rose Gold's illness, saying she is secretly starving and poisoning her. Because of this and the dire testimony of Rose Gold, Patty is given a five-year prison sentence.

"The courtroom sweltered on that Wednesday. The gallery was crowded. Most of Deadwick's [Illinois] residents had shown up to sick their noses in our business. Plenty of reporters had come as well; they couldn't resist weaving a few more scandalous lies into their stories. My lawyer—an incompetent public defender who would have been more at home behind the counter of a medical marijuana dispensary—fanned himself and fidgeted in this baggy suit. The day I met him, I knew I was doomed. . . .

. . . . "My stomach churned. My lawyer had said Rose Gold would testify against me, but I'd hoped she would back out before this day came. I turned to peek at my daughter, in her usual spot in the gallery, sandwiched between Alex and Mary Stone. Rose Gold had been living at the Stones' townhouse for six months since the day I was arrested. I wasn't allowed to contact her. . . .

. . . "Rose Gold stood, bony shoulders propping up the sleeves of her cardigan. Eyes wide, she swayed a little, as though she might faint. Her skin was even paler than usual. She looked much younger than eighteen.

. . . "Rose Gold took a shaky step forward, one after another until she was close enough for me to reach out and touch. I had to stop her. I couldn't let her put herself through any more of this agony. . . .

As Rose Gold mumbles through her testimony, it is easy to see she is frightened, yet she manages to discuss her childhood while adding comments Patty told her about her own upbringing. When a recess is called, Patty believes she will be exonerated, but Rose Gold's follows with this comment:

. . . "Her expression darkened. She glanced at the jury, who were gathering their things, and leaned into the microphone. When she spoke, her voice rang out loud and confident. 'My mother belongs in prison.'"

Three years pass, and Rose Gold makes no contact with her mother. She lives in a tiny apartment and works as a cashier at the local electronics shop. Here her only concern is earning enough money to afford dental work to replace her rotted teeth from years of vomiting. Her only social life consists of texting with a guy named Phil she met online and going out with Alex. But when Rose Gold visits Alex who is college and goes to a club with her and her friends, she overhears Alex trashing her, humiliating her, ending that friendship.

One day at work a strange man approaches her informing her he is her father. She informs him Patty said her father died long ago of an overdose. When he shows Rose Gold a photo of him with her mother from before her birth, she agrees to meet with him to talk. He apologizes for not being a real dad, saying Patty didn't want him in their lives, though for 18 years he paid child support. He states her he is married with three children causing her to hope maybe she can be a part of a family.

Livid with her mother, Rose Gold wonders if she can believe anything she was told growing up. She decides to visit Patty in prison hoping to get learn the truth, not to mention obtain an apology for being abused:

"Mom turned her attention to me. 'Of course, I do, sugar plum,' she said.

"We both waited for the other person to say something. When it became clear she had no intention of elaborating, I cleared my throat. 'I want to hear you say it.'

"I tried again gaze focused on the table between us. 'I want to hear you say—out loud—what you were convicted of.' A trickle of sweat ran down my chest.

"Mom stretched her arms out wide, forming a T. Like Jesus in his crucifix, she might have said.

"Goosebumps pooped up on my arms. I couldn't believe she'd come out and said it. My mother was finally taking responsibility for all the ways she had hurt me. Was she ready to admit she'd ruined my childhood? Maybe this would be the turning point in our relationship. Maybe I didn't have to shun her for the rest of my life.

"When I glance up, Mom stopped humming a cheery tune I hadn't heard her start. She sniffed. 'But you and I both know that's a load of horse hockey.'"

This is when Rose Gold realizes her mother will never apologize to her or admit her fault, so why then does she accept her mother into her home when she is released from prison?

This debut novel is sure to raise one's hackles. At first, it is difficult to discern if Patty is crazy or if Rose Gold is the unbalanced one. Through the backstories of each of their lives—which contains a lot of information as to why and how both women act—it is a bit confusing putting the pieces together. Yet the intensity of emotions and actions of them make this a true page-turner. Chilling and calculating. It is somewhat easy to understand Patty from her horrendous past, though not condone her actions. As for Rose Gold, it is easy to appreciate why she would want retribution.