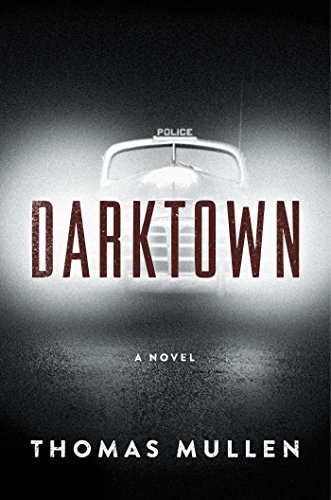 Darktown proves to be an uncomfortable read at times. Set in post WWII Atlanta, it unabashedly puts racism front and center in the South. Complete with the lexicon used in 1948, the author brings us back to a time in our nation’s history when discrimination and segregation were the norm.

The story begins with a simple auto accident—a car hits a light pole and two black officers on foot patrol, Boggs and Smith, observe what happened and quickly investigate. A white man is driving; he has a black female passenger who has an obvious bruise on her face. The two newly sworn black cops have no authority to take any action against a white man and must call a white officer to the scene. Once the officer arrives, he gives the man, who has obviously been drinking, a pass and the man drives off.

Later, the same female passenger’s body is discovered lying in a garbage-strewn field. No one in the white police department cares about a black person’s murder, and no investigation ensues. Thus the young, inexperienced officers are forced to begin their own unauthorized, covert investigation. The mystery surrounding the death of the young black woman makes for a gripping tale with many twists and turns.

Black officers have little authority beyond writing tickets and refereeing domestic disputes. They cannot drive squad cars or work outside of Darktown, the area where Atlanta blacks must live. In fact, the newly minted eight black cops may not even enter Atlanta Police Headquarters. They are forced to work out of the basement of the local black YMCA, and are supervised by a lone white sergeant.

The novel boldly displays the corruption and power wielded by white cops and politicians. They control Atlanta in a ruthless manner and seem to solve nearly every unsolvable crime by framing innocent blacks. At the same time, most of the white cops do their best to disparage and denigrate their fellow black officers, hoping the eight-man contingent will either be disbanded or the men will resign.

With little support from the department or even the citizens of Darktown, the minority cops struggle forward. They feel invested in their community, wanting to make it a better place for their race. The obstacles facing them at times dishearten Boggs and Smith. Indeed, there are even times when their biggest threat comes not from the criminal element, but from their own white colleagues.

The author’s writing may make some readers flinch as he describes in vivid detail racist acts and language. He regularly used the “n” word, which makes the story even more graphic and credible. Darktown is a compelling well-crafted read, and a reminder of how far we have come as a nation from a time when race defined success and opportunity. Or have we?