Darkness on His Bones (A James Asher Vampire Novel) 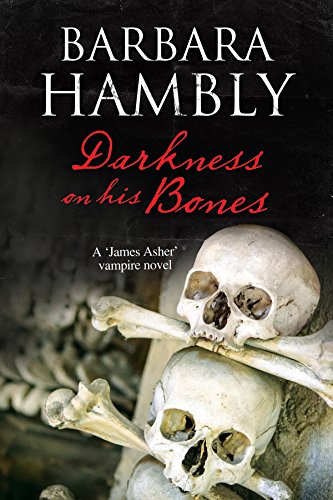 “one woman’s determination to protect her husband is juxtaposed against the panic of the city’s inhabitants . . . ”

It is July 1914 when Lydia Asher receives a cablegram from the secretary of the British Embassy in Paris, concerning her husband:

Traveling across the Channel, Lydia finds herself in a city in the throes of panic. Archduke Francis Ferdinand has been assassinated, and Paris is under threat of invasion. Indeed, there are barely any doctors in the hospital, or medicine either, the former hurrying to enlist, the latter being confiscated by the army.

“faint shouting drifted from the Rue Saint-Antoine, mingled with strains of La Marseillaise . . . a drunken woman shouted almost beneath the window, A bas la Boche! The French army was readying for war.”

There’s no information of why James was in the bell tower of St. Clare’s church from which he fell, but his wife isn’t going to sit around and wait for him to come out of his coma and explain. Lydia is well aware of her husband’s undercover work for the British government. She gets in touch with the one man who can help, a man James has worked with many times in the past, one he paradoxically considers a friend.

Simon is also a man for whom Lydia has a shameful affection.

“he had saved her life . . . she recalled the nights she’d walked with him in the spring mists . . . remembered moments when he smiled the smile of the man he’d once been . . . and she hated herself for feeling what she felt  . . .”

Now, however, both she and James need Don Simon.

Don Simon arrives. With Lydia investigating by day while he guards James by night, together they begin to piece together the days leading up to his fall.

Though unconscious, James continues to dream of his assignment but as usual in the unconscious, things don’t make sense.

“there was a dreamy sort of forgetfulness . . . sunk deep in darkness his dreaming self shouted, Run, you idiot! They’re behind you, around you . . . Cold hands gripped his arms . . . cold lips against his skin . . .”

Old images entangle with new. He dreams of his school days in Paris, but also of other memories he couldn’t know . . . of Don Simon’s attempts to absolve himself of his vampirism and find salvation within the Church itself and instead being tricked into killing in God’s name. . . .

“‘you said if I did as you asked—’
‘Will God extend his mercy to any man,’ said the Cardinal, ‘who will refuse him the service he asks?’
Simon looked up, pale eyes filled with anguish . . .”

. . . and of a religious war among the vampires between those who do and don’t follow the True Faith.

A disturbing scenario evolves. The vampires of Paris are allying themselves with German in an attempt to take over Paris and make it into their hunting ground. They are also fighting among themselves for leadership.

“ . . . she could hear in his voice this was a scene dreamed and daydreamed in his heart . . . ‘The Paris vampires care very much if the Germans enter the city . . . when it happened before, all of the Paris nest was trapped and wiped out except for one.’”

Now that one is being challenged by a rebellious nestling.

Through it all runs the hunt for the Facinum, a talisman of mastery, and a chapel of bones, and whoever owns one and finds the other will rule.

James, his wife, and his vampire-colleague are fighting against something much worse than an invasion by the Germans: a vampire leader capable of stealing the strongest man’s will . . . of killing anyone standing in the way without mercy, and the mysterious Facinum will give her more than control over every vampire from Flanders to the Garonne . . .

Set against Paris’ desperate early days during World War One, one woman’s determination to protect her husband is juxtaposed against the panic of the city’s inhabitants. Darkness in His Bones is a story of faith versus promises and a belief that in even the most evil may be found some vestige of good.