The Darkness of Evil (The Karen Vail Novels) 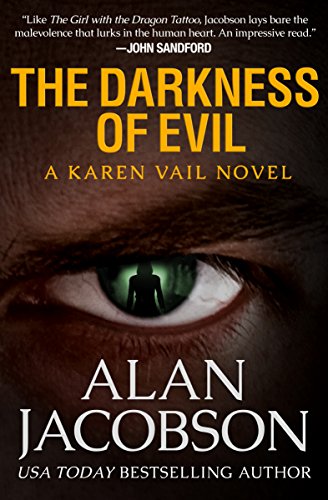 The Darkness of Evil is the seventh book in the Karen Vail series. Vail is an FBI profiler who’s investigated some of the world’s most vicious serial killers. In this latest thriller, Vail teams up with a U.S. Marshall fugitive team to hunt down an escaped convict, Roscoe Lee Marcks, also known as the “Blood Lines serial killer.”

At the story begins, we see Vail rather enjoying her assignment involving shadowing the escaped killer’s daughter, Jasmine Marcks, as she embarks on a book tour promoting the memoir she wrote describing her father’s despicable life as a murderer. She writes in graphic detail the man’s signature torture ritual—cutting lines on the victims’ stomach and excising the genitals. She also includes other details that turn out to enrage and embarrass her father, as if being a murderer wasn’t enough.

Things begin to heat up once Jasmine receives a cryptic message from her dad who is now on the loose from his maximum-security cell. The message? He will find her and kill her. Jasmine disregards Vail’s advice to provide 24/7 protection. She decides she’d be safer if no one knows where she is, including Vail. This secrecy causes an enormous problem for Vail and impacts the time she should be spending trying to track down the woman’s father.

The pacing of the story is good, with required highs and lows. Jacobson includes plenty of tension and foreshadowing. And while readers can likely figure out the ending of the story, the journey to that point is filled with many twists and new mysteries.

Along the way, Vail enlists the help of a former FBI profiler who was the first to develop the profile on Marcks 20 years earlier. Although she has recently interviewed Marcks, she doesn’t have enough information to form a truly fresh perspective. The two behavioral scientists collaborate to come up with a different take on both Marcks and his daughter, however not before Marcks almost kills the retired agent. They discover things are not what they seem with both the father and daughter.

The author has created a truly frightening character in Marcks. His psychopathy and behavior are completely out of phase with the rest of humankind. To say he’s a monster would be an understatement. However, as the story continues another protagonist emerges, one perhaps even more monstrous than Roscoe Lee Marcks. Nice twist.

As usual with a novel by Alan Jacobson, the book is quite detailed and mostly realistic. Jacobson has spent years of research with the FBI and other law enforcement agencies. He’s also trained with several law enforcement entities as well. Thus, his perspective and explanation of procedure lends much credibility to his stories and characters. There are times when the author perhaps gives a tad too much detail, making the 500-page story a long read. However, the entire tale, along with the characters, makes for another great thriller/mystery.

If you doubted evil exists on this earth, simply read The Darkness of Evil to disabuse yourself.