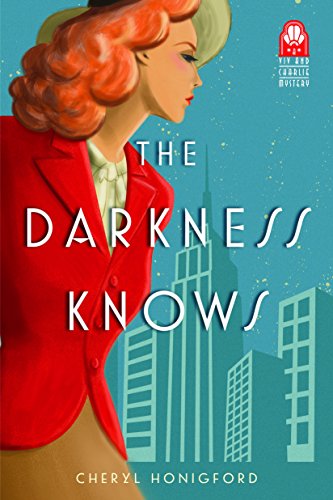 Mysteries come in a variety of sizes and shapes, and The Darkness Knows by Cheryl Honigford is a perfect fit for the “cozy” mystery category. As cozies go, this one was a fun read and a well-constructed whodunit.

Creatively, the author does things right: she writes in third person subjective, staying in the protagonist’s POV from beginning to end. That is not always an easy task, and in doing so, the reader develops a relationship with the protagonist.

She creates a variety of characters. There’s Vivian Witchell, heroine protagonist . . . well developed but does not grow a lot from beginning to end. At times Vivian appears a little too weepy, but on the whole, she is a good, believable character.

Frances Barrows, the bitchy actress competing with Vivian; Graham Yarborough, the self-centered actor who believes his own publicity; Charlie Haverman, the pulp-fiction detective and hardnosed hero.

There are the obligatory minor characters: Imogene Crook, the scatterbrained secretary and Vivian’s best friend; Morty Nickerson the creepy engineer; Sammy Evans the midget who presents on radio in children’s roles; Bill Purdy the show’s announcer; Mr. Hart, the owner of the station, and Peggy, his teenaged daughter. And of course, Marjorie Fox, the unpopular murder victim. Honigford builds in several other characters like Angelo the elevator operator who may play a greater role in the murder than first assumed. All of her characters are designed to be more than they appear.

The story starts with a scene from The Darkness Knows, one of the popular police serials at WCHI radio station in Chicago. Vivian has just scooped the leading female role from her major competitor, Frances, and she nervously moves through the scene. Between the early show and the later evening show, she goes to the studio’s lounge and there she encounters a very dead Marjorie Fox.

A note is found on Marjorie’s body, indicating that Vivian might just be next. The proverbially inept police are called to investigate, and Mr. Hart brings in Charlie Haverman, a private dick whose sole role becomes that of Vivian’s protector.

As the story unfolds, Vivian is drawn to Graham Yarborough, the self-centered lead actor who manipulates the people, especially women and reporters, in his world. He’s suave, handsome, charming, and finds joy at winding women around his little finger. But Vivian is no dummy, and it does not take long for her to realize Graham’s true character, while at the same time her faithful, handsome watchdog stays close at hand. It’s not hard to figure that the real romance flourishing is between Charlie and Vivian.

Throughout the story, Marjorie Fox’s history is spelled out in tantalizing bits and pieces. She was not well liked and communicated very little with her coworkers. An aging actress, her dirty little secrets begin to surface as each chapter unfolds.

In one scene, a shot in the dark at the station’s Halloween party convinces Vivian that she really is the next victim. But even fraught with fear as her mind is, Vivian is undaunted in her goal to solve the murder and save her own life. And yet is her life really in danger or is it all a sham, as Charlie believes? Questions arise, and Honigford injects more red herrings and foreshadowing to tease the reader.

While cozies are not rife with terror, blood, guts, or sex, Honigford does a good job of alluding to these issues while keeping them effectively in the background. This story has a lot of twists and turns; some red herrings, some good foreshadowing, and at the end of the story, Honigford ties up all the loose ends to a satisfying conclusion. If there is one disappointment, it is that Francis does not get her comeuppance—perhaps in the next book.

It should be noted also that Honigford is skilled at painting a vivid picture of Chicago in the late 1930s. Fans of the pre-World War II era will applaud her. Her description of the streets and neighborhoods of Chicago is clean and crisp, and residents of that great city will appreciate the visual she provides.

This debut novel of a new series is a good start for what promises to be satisfying reading for those who enjoy cozy mysteries and good puzzles.