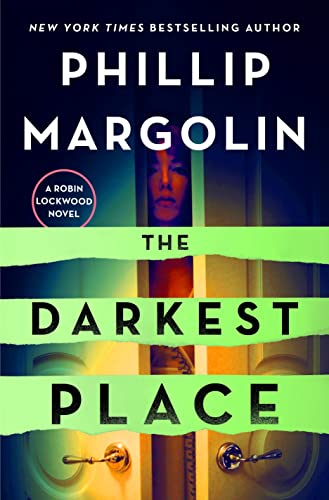 “Margolin is a wizard who creates a story that brings all the issues to a neatly trimmed head.”

If you have nothing to do for two days, pick up Phillip Margolin’s latest legal thriller, The Darkest Place—you won’t be disappointed.

Margolin’s main character, lawyer Robin Lockwood, finds herself agreeing to take on a favor from one of her favorite judges, the Honorable Harold Wright. It seems that all other lawyers refused the court-appointed task. It goes against her better judgement, but she accepts the task.

Lloyd Arness is charged with assault and rape, but the worst thing about the crime is that Arness revels in the situation, bragging about it to his acquaintances. Robin’s meeting with Arness leaves her skin crawling. When Robin tells her fiancé and partner about the case, he is not impressed but knows that court-appointed cases are not usually a walk in the park.

In the meantime, Margolin brings the reader into another situation when the local Portland, Oregon, police inform Marjorie Loman, also a police officer, that her husband has been tortured and killed, her response is one of joy. It seems they are in a contentious divorce, and her husband has drained their bank account and converted the money to gold but did not inform Marjorie of its whereabouts.

It doesn’t take long for two unkempt bullies to show up at her house and inform her that her husband owed them a considerable amount of money and that debt now passes on to her. A dilemma to say the least.

But back at Robin’s predicament, she defends Arness and at the end of the trial, the husband of the rape victim shows up at court determined to kill Arness. Horrifically, Robin’s fiancé gets caught in the crossfire and is killed.

So how do these two stories connect? Driven by grief, Robin takes leave and goes across country to stay with her family in Elk Grove. While there, she is approached by a local lawyer seeking her help with a case he has accepted.

It appears that Marjorie Loman, in an attempt to escape the two thugs, races across country and ends up in Elk Grove. While there, she learns of a young couple who are unable to conceive and are looking for a surrogate to carry their child. Marjorie is in the right place at the right time and agrees to take on the task. She signs away any parental rights, but due to a mix up at the hospital, she is given time to bond with the newborn, and decides to keep the baby.

Legally, she has no rights, and she ends up kidnapping the baby, attacking the father, and injuring the mother. Marjorie is found, the baby is returned to the parents, and Marjorie is charged with assault and kidnapping.

And so, as she deals with her grief, Robin accepts the job as co-counsel and becomes immersed in Marjorie’s story.

The remainder of the story takes the reader through the legal proceedings and Robin’s success as she is able to convince the jury to bring in a not-guilty charge on all accounts. Success, indeed, but something nags at Robin, and she can’t put her finger on it.

As the case closes, Marjorie is approached by two police officers from Portland, Oregon, with a warrant for Marjorie’s arrest, charging her with the murder of her husband.

Against her better judgement, Robin takes on Marjorie’s case, and before the trial begins, she is able to convince the judge to allow bail. At this point, the two thugs reappear and confront Marjorie about the money, a fight ensues, and Marjorie kills the two hoodlums in self-defense. The murder charge for killing her husband is dropped, and she is not charged with the murders of the two thugs. She is free to go and live her life again.

But that little itch continues to nag at the back of Robin’s mind, and she can’t figure out why.

Margolin designs Marjorie’s situation to be almost perfect, and so not to be a spoiler, let’s just say that justice is served in the end.

Margolin is a wizard who creates a story that brings all the issues to a neatly trimmed head. It’s a fast read, one that is hard to put down, ergo the two-day time frame from beginning to end.